Amit Shah: Despite protests, CAA will not be withdrawn

Union Home Minister Amit Shah on Tuesday said the law will not be scrapped despite the protests over it.


Lucknow: Attacking the opposition for "misleading" people on the Citizenship Amendment Act, Union Home Minister Amit Shah on Tuesday said the law will not be scrapped despite the protests over it.

Addressing a rally here in support of the CAA, Shah also declared that the construction of a Ram temple touching the skies in Ayodhya will begin within three months.

The minister accused the Congress of not implementing the suggestions that came from its own leaders in the past on granting citizenship to minority Hindus in Pakistan, Bangladesh (then East Pakistan) and Afghanistan after Partition.

At a public meeting in Lucknow, Uttar Pradesh. https://t.co/mJrK0rPV0r

At the same meeting, Uttar Pradesh Chief Minister Yogi Adityanath alleged that the Congress is shelling out money for arson and protests over the CAA.

Amit Shah said there is no provision in the amended law for taking anyone's citizenship away. A canard is being spread against the CAA by the Congress, SP, BSP, and Trinamool Congress.

The CAA is a law to grant citizenship, he added.

I want to say that irrespective of the protests it will not be withdrawn," he added.

Shah challenged opposition leaders to hold a discussion with him on the CAA at a public forum.

"If any clause of the CAA takes away the citizenship of anyone, including Muslims, they can tell me. The agitations and sit-ins, which are being organised in the country against it, are wrong," he said.

"The Congress has become blind due to vote bank politics," he said, and also blamed the party for Partition.

"Rahul baba open your ears and listen carefully. Because of the sins of your party in 1947, the country's partition on religious basis was accepted. Mentioning figures, he said the proportion of Hindus, Sikhs, Buddhists and Jains in Pakistan and Bangladesh dropped drastically after Partition.

"Where have they gone? They were either killed, converted or came to India as refugees. These blind people cannot see that atrocities were committed on crores of people," he said.

Shah asked opposition parties where they were when crores of people were killed in Pakistan, Afghanistan and Bangladesh on the basis of religion.

He said five lakh Pandits were displaced from Kashmir, but these parties did not utter a word .

Now, because of PM Modi, a new chapter has begun in the lives of these people," he said.

Shah referred to the recent Supreme Court verdict that allows the construction of a Ram temple at the disputed Ayodhya site. The crowd cheered when he said the construction will begin in three months. 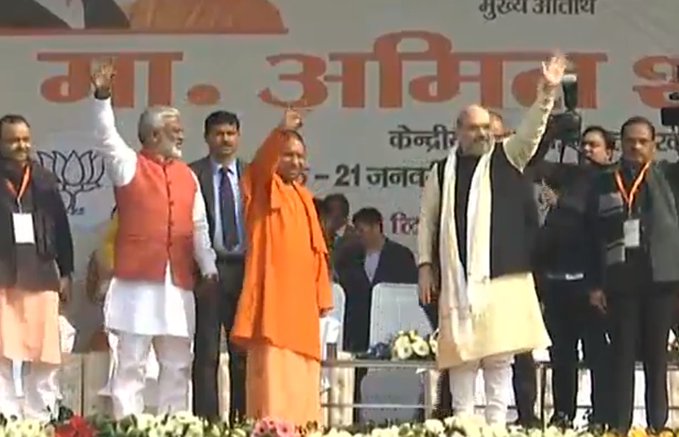 Accusing the opposition of speaking the language of Pakistan prime minister Imran Khan, the BJP leader said, "I don't know what relation they have with Khan."

On Mamata Banerjee, he charged, "She was demanding citizenship for Dalit Bengalis. Now when the citizenship is being given to them, she has problems."

Shah claimed that during the Rajasthan assembly elections, the Congress had advocated citizenship to Hindus from Pakistan.

Mayawati: Opposing voices against CAA now even coming from NDA, Centre must take back Act