India jumped to the top of the pecking order as young Manu Bhaker clinched a gold medal while Ravi Kumar bagged a bronze in the ISSF World Cup in Guadalajara, Mexico.

New Delhi: India jumped to the top of the pecking order as young Manu Bhaker clinched a gold medal while Ravi Kumar bagged a bronze in the ISSF World Cup in Guadalajara, Mexico.

Bhaker beat the host country s Alejandra Zavala, a two-time World Cup Finals winner, with a 10.8 in the last shot of the 24 shot final, to come out on top with a score of 237.5.

Zavala ended at 237.1 while Celine Goberville of France won the bronze with a score of 217.0. India s Yashaswini Singh Deswal missed out on a medal, finishing fourth with 196.1.

...and we have a 16 years old gold medalist in Guadalajara! #ISSFWC pic.twitter.com/ZB0PnNEm2b

Earlier, Ravi Kumar won his first World Cup medal- a bronze in the Men s 10M Air Rifle event. Ravi had made it to three finals last year, including in the World Cup Finals, without winning a medal.

He shot 226.4 and had to beat compatriot Deepak Kumar in a shoot-off for third and fourth spots in the final. 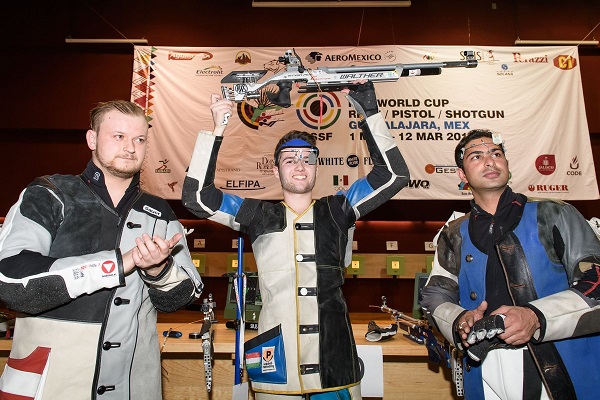 Reacting after winning the medal, Manu Bhaker said, "I am extremely happy at winning Gold, especially as this is my first World Cup. I look forward to perform even better in upcoming competitions."

Commenting on India's start to the new season, National Rifle Association of India president Raninder Singh said, This is a dream start. The young guns and future of Indian shooting are firing on all cylinders and let us only hope that these are signs of even better things to come in the near future.

"Manu showed excellent composure for one so young and Ravi s consistency over the past year or so has also been heartening to watch. We are now hungry for more."