Bollywood Masala: 'Nepotism is just the tip of the iceberg', says Abhay Deol

Actor Abhay Deol on Saturday said that nepotism is just the "tip of the iceberg', it is prevalent everywhere, and is not just limited to the film industry.


New Delhi: Actor Abhay Deol on Saturday said that nepotism is just the "tip of the iceberg', it is prevalent everywhere, and is not just limited to the film industry.

Deol, who made his Bollywood debut with 'Socha Na Tha' under his uncle and actor Dharmendra Deol's Banner Vijayta Films, took to Instagram to share his views in the ongoing debate He posted a collage featuring him and his uncle Dharmendra and wrote, "My uncle, whom I affectionately call dad, was an outsider who made it big in the film industry. I'm glad there is an active debate on the practices behind the scenes."

"Nepotism is just the tip of the iceberg. I've only ever made one film with my family, my 1st, and I'm grateful to be blessed and have that privileged. I've gone that extra mile in my career to make my own path, something that dad always encouraged. For me he was the inspiration," he added. 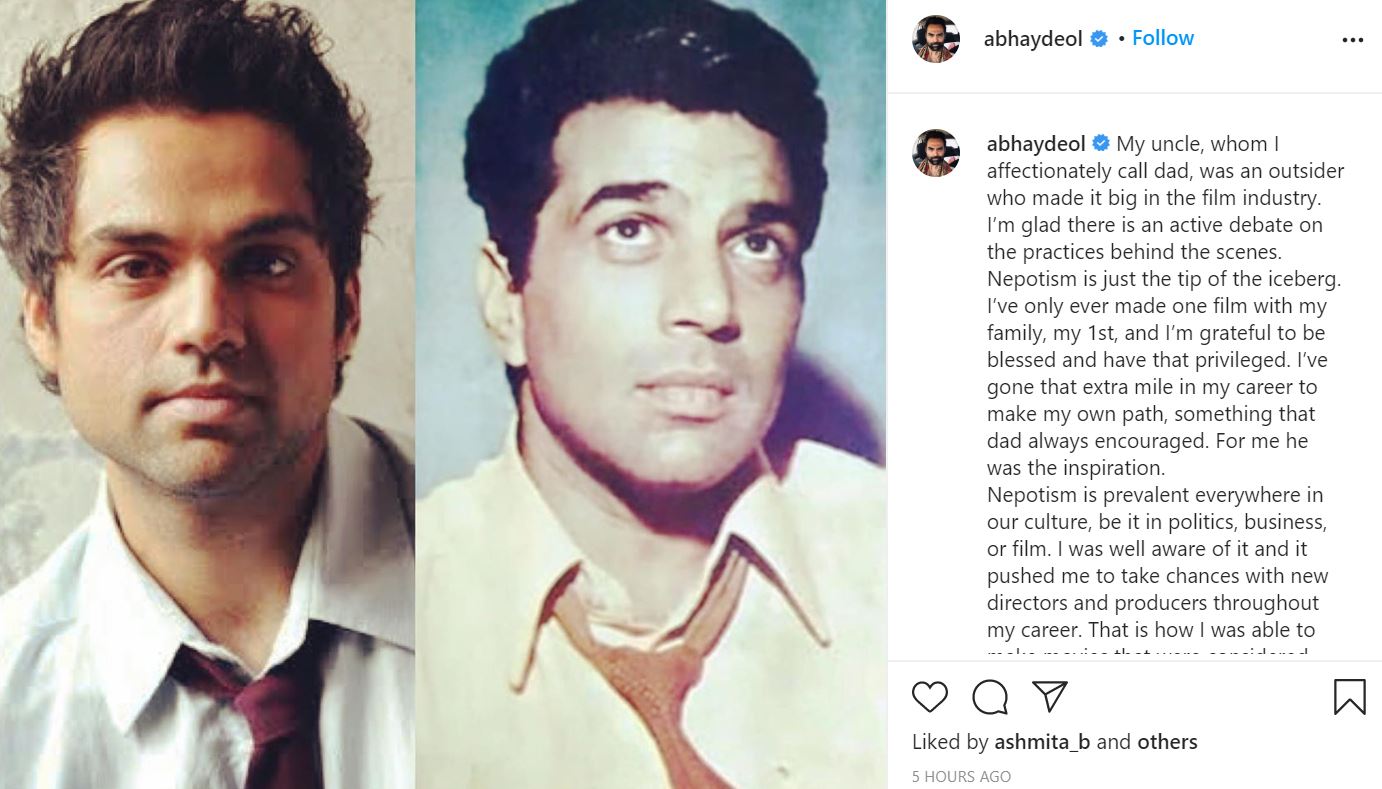 "Nepotism is prevalent everywhere in our culture, be it in politics, business, or film. I was well aware of it and it pushed me to take chances with new directors and producers throughout my career. That is how I was able to make movies that were considered "out of the box." I'm glad some of those artists and films went on to have tremendous success," he wrote.

"While it plays a part in every country, nepotism has taken on another dimension here in India. I suspect caste plays a major role in it being more pronounced here than in other parts of the world. After all, it is "jati" that dictates that a son carry on the work of his father, while the daughter is expected to marry and be a housewife," he added.

The 'Dev D' actor then stated that changes can be brought only through cultural evolution.

"If we are serious about making changes for the better, then focusing on only one aspect, one industry, while ignoring the many others, will be incomplete and possibly counter productive. We need a cultural evolution," said Deol.

"After all, where do our filmmakers, politicians, and businessmen come from? They are people just like everyone. They grow up within the same system as everybody else. They are a reflection of their culture. Talent everywhere deserves a chance to shine in his or her medium," he added.

He ended the note by stating that he is glad that more actors are coming out and talking about their experiences these days.

"As we have learnt over the past few weeks, there are several ways in which an artist is either uplifted to success, or beaten down to failure. I'm glad more actors are coming out today and speaking of their experiences. I've been vocal about mine for years now, but as a lone voice I could only do so much," he wrote.

"It's easy to smear one artist for speaking out, and I have been at the receiving end from time to time. But as a group, a collective, that becomes difficult. Maybe now is our watershed moment. #change #equalopportunity #nepotism #caste #jati #nuance #dialogue," he added.

The debate on nepotism was rekindled after Bollywood actor Sushant Singh Rajput was found dead earlier last month in his Mumbai residence.

Several reports of Sushant being a victim of nepotism in the Indian film industry have since then surfaced on social media. (ANI)