Mumbai (Maharashtra): Producer Boney Kapoor, who recently joined Instagram, has actively been sharing pictures with his beloved family members.
Taking to his Instagram handle on Saturday, Boney shared an adorable picture with his late wife and actor Sridevi.

In the picture, Sridevi, dressed in a coat and a scarf, can be seen smiling, with her arms locked with Boney's, who is smiling along with her.
He added the caption, "My heart," along with a string of red heart emoticons. Fans poured in love-filled comments on the post.
"The best couple," a social media user wrote. 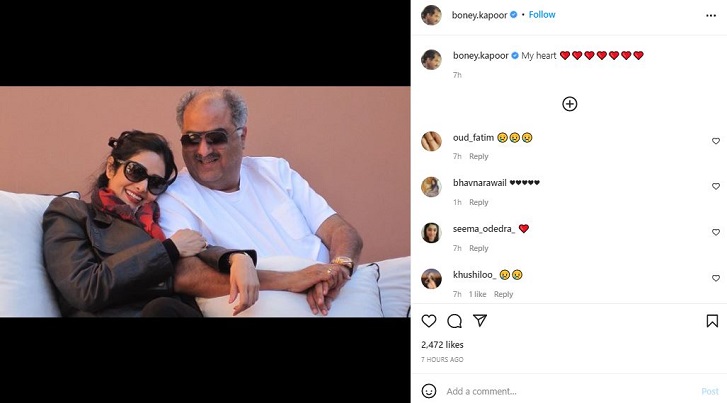 "Miss you always ma'am," another added.
Previously, Boney had posted another picture featuring his entire family and captioned it as, "My strength."

Before that, he shared a picture in which he could be seen posing with his children -- Anshula, Arjun, Janhvi and Khushi. He penned the caption, "My wealth".

Boney and Sridevi got married in 1996 and were blessed with two daughters - Janhvi and Khushi. Unfortunately, on February 24, 2018, Sridevi died in Dubai after attending a family function there. Boney is also a doting father to Arjun and Anshula, who are his children from his first marriage to Mona Shourie. (ANI)