Bollywood actors, including Vicky Kaushal, Anupam Kher, celebrities like Sachin Tendulkar today took to social media to extended their heartfelt greetings on India's 70th Republic Day and express their love and respect for the nation.

Vicky Kaushal, who recently featured in 'Uri: The Surgical Strike,' Took to Instagram to share a picture of himself, dressed in white kurta pajama, posing with the Tricolour in his hand. "Happy Republic Day. Jai Hind!" he wrote in the caption.

Vicky also posted an Instagram story where he can be seen playing cricket "in the building he grew up." Explaining the scene, he wrote, "It is a ritual of a sort to play night cricket on the eve of Republic Day. Never miss it for anything, even when I have a 2 am flight to catch."

In a following Kaushal mentioned that he will be visiting the Wagah border to celebrate the occasion. 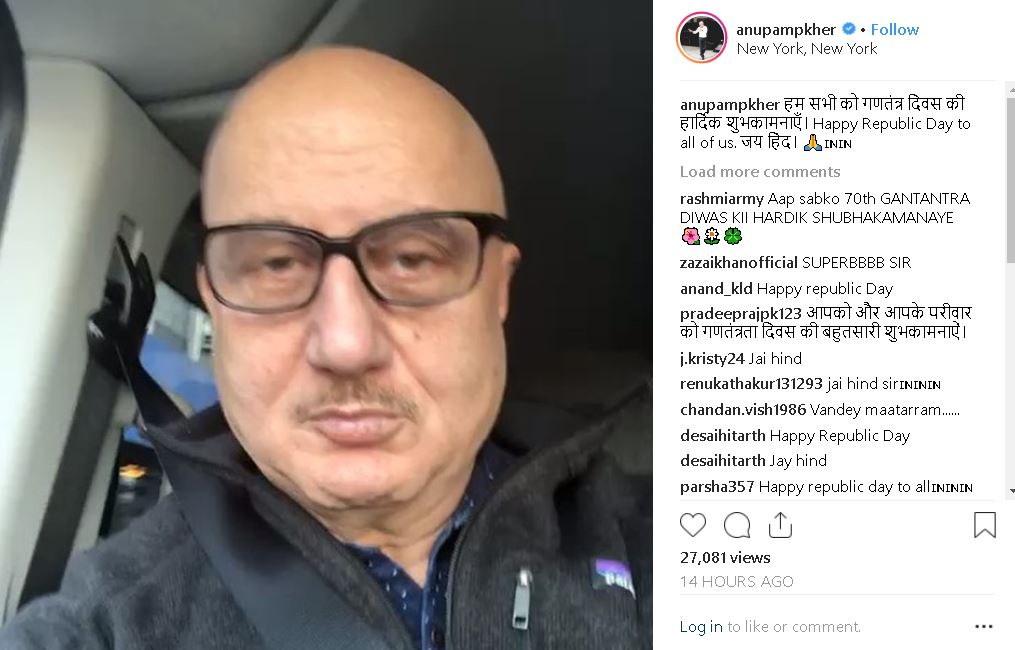 Anupam Kher posted a video of himself on Instagram and extended his wishes to his followers. "Happy Republic Day to all of us. Jai Hind," he wrote in the caption.

"Always gives me goosebumps when our National Anthem plays and the feeling used to become all the more special whenever I heard it on the ground while representing India," Sachin wrote in the caption.

Ajay Devgan also extended his Republic Day wishes and tweeted, "It out duty to follow our constitution. Happy Republic Day."

Congratulations,@BajpayeeManoj Sir on winning the esteemed Padma Shri. I am so fortunate to have had the chance to share screen space with you. Your valour & dedication is inspiring. Ever onward! ??❤️

Praising the constitution on India in his tweet, Rajkumar Rao wrote, "The efforts of Dr Ambedkar and the rest of the constituent assembly resulted in the birth of one of the most diverse constitutions that exist there in the world. It fills me with pride every time I think of being guided by it and see our national flag being hoisted. Happy republic day."

On this day in 1950 solidified its sovereignty by putting into effect the Constitution of India, a governing document that took nearly three years of careful deliberation to finalise, and whose eventual enactment was joyfully celebrated across the country. (ANI)

I am and will always be there for you: Anupam Kher's 35th anniversary message for Kirron Kher

Anupam Kher: Removal of Article 370 will solve all issues of Kashmir