Former finance minister and senior Congress leader P Chidambaram on Saturday attacked the central government and said that it has wrecked India's economy over the last six months.

New Delhi: Former finance minister and senior Congress leader P Chidambaram on Saturday attacked the central government and said that it has wrecked India's economy over the last six months.

"In six months, Prime Minister Narendra Modi</a's government has wrecked India's economy. Yet ministers are completely clueless. Yesterday Finance Minister said everything's alright, we are on top of the world. The only thing she didn't say was 'achhe din aane wale hain'," Chidambaram said at the Congress' 'Bharat Bachao' rally.

"The picture of the country is clear in front of the people. Congress has always struggled for the people," Madhya Pradesh Chief Minister Kamal Nath told reporters here.

When asked about BJP going to Election Commission over Congress leader Rahul Gandhi's "rape in India" remark, Chhattisgarh Chief Minister Bhaghel said: "They should have gone to EC against Modi when he called Delhi 'rape capital'. Why BJP leaders were silent on incidents of rape in Hyderabad and Uttar Pradesh?"

Deputy Chief Minister of Rajasthan, Sachin Pilot, said that the attention of people should be on issues that matter to them.

Also Read: Must be thoroughly inquired to find if it was genuine: P Chidambaram on Telangana encounter

"The economy has almost come to standstill. Job losses are at a record high and there is inflation. The government has failed in countermeasures," Pilot said. 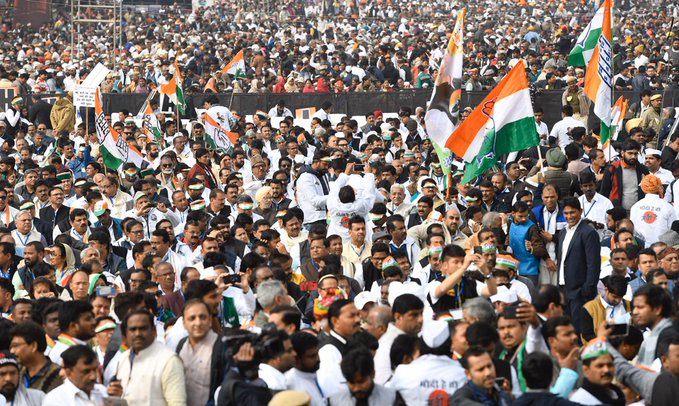 Congress party workers from across the country are participating in this rally, which is being organised to highlight several issues including "sluggish economy, rising unemployment, and farmers' problems."

The rally of the Congress party was earlier scheduled to be held on November 30 but was later postponed to December 14 in view of the Winter Session of the Parliament, which concluded on Friday. (ANI)