The country's contingent will be looking forward to taking a few steps ahead towards medal contention in sports like Cricket, Boxing, Hockey, Judo and Weightlifting. Full schedule on Dynamite News:

New Delhi: After an action-packed Day 5 of Commonwealth Games 2022 in Birmingham which saw Team India capturing some medals and making history in Lawn Bowls, the country's contingent will be looking forward to taking a few steps ahead towards medal contention in sports like Cricket, Boxing, Hockey, Judo and Weightlifting.

The action will kick off from Lawn Bowls from 1:00 pm onwards, with Men's Singles player Mridul Borgohain taking on Chris Locke of Falkland Islands in his second game after a loss in the first one to Shannon Mcilroy of New Zealand.

In the Women's Pairs category, India will take on Niue after registering a loss to New Zealand in their first match.

From 2:00 pm onwards, India's Lovpreet Singh will be in action in Men's 109 kg weightlifting.

Judo action will start from 2:30 pm onwards, with Tulika Mann set to play in Women's +78 kg QFs. In the Men's +100 kg Round of 16 match, Deepak Deswal will take on Eric Jean Sebastian of Cameroon. Knockout matches will follow later subject to qualification.

From 3:30 pm onwards, the Indian Women's Hockey team will continue their campaign against Canada.At the same time, Mixed Squash duo of Joshna Chinappa and Sandhu will be in action in Round of 32 match against Sri Lanka. 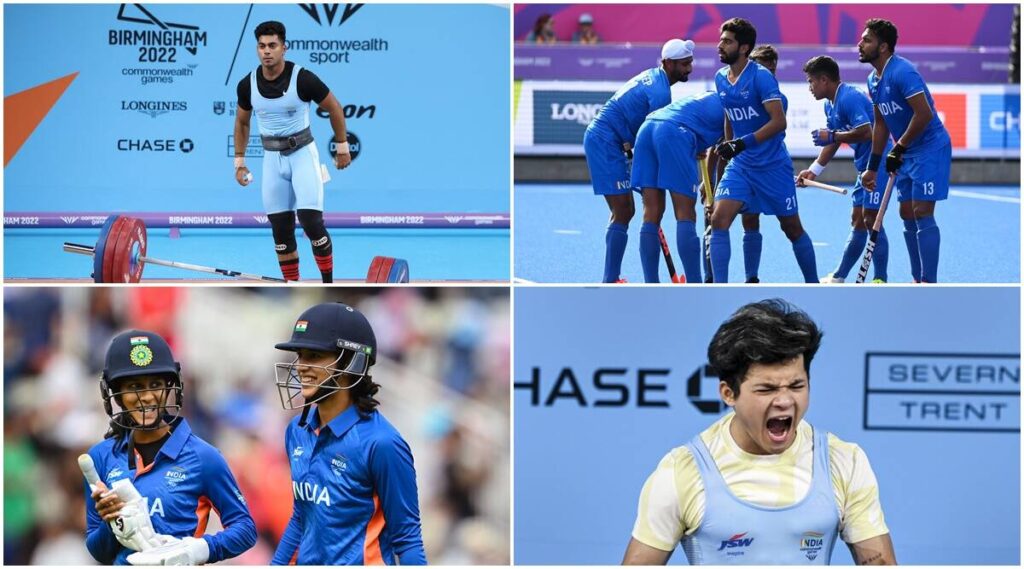 Action will once again move to Lawn Bowls area from 4:00 pm onwards, with next Mridul Borgohain playing his next match against Scotland's Ian McClean and Indian Women's Pairs team playing their next game against South Africa.

In Boxing from 4:45 pm onwards, Nitu Ganghas will box in her QF match against Nicole Clyde of Northern Ireland.From 4:55 PM ownards, Men's Singles Para TT team will start its campaign with Raj Alagar in action.

From 5:45 pm onwards, Hussamuddin will participate in Over 54-57 kg QFs against Namibia's Tryagain Morning Ndevelo.

At 8:30 pm or 11:30 pm, fans could get to witness Saurav Ghosal in a medal match depending on his performance in his semi-final clash.

Para Table Tennis action will continue from 9:40 PM onwards in Women's Singles category once again Baby Sahana Ravi, Bhavina Patel and Sonalben Patel in action again one by one.

From 10:30 PM onwards, India vs Barbados cricket match will take place, which is extremely vital for medal chances of both. Also at the same time, Men's Fours Lawn Bowls team will be playing against England.

From 11:00 PM onwards, Gurdip Singh will be participating in Men's 109+ kg final in weightlifting.

At 11:15 PM, Nikhat Zareen will box in her QF match against Helen Jones of Wales in the Over 48-50kg category.

From 11:30 PM onwards, Tejaswini Shankar could be seen in High Jump finals depending on his qualification.

At 12:35 AM, Women's Shot Put final will take place and Manpreet Kaur will be in action for India as a medal hope.

From 12:45 AM, boxer Lovlina Borgohain, the Tokyo Olympics 2020 medalist will start her campaign against Rosie Eccles of Wales in Over 64-70 kg category QFs.At 2:00 PM, boxer Ashish Singh will be in action against Aaron Bowen of England in Over 75-80 kg QFs. (ANI)

CWC'19: Kiwis to clash with South Africa, all eyes on these 5 players