Delhi Assembly Session began with Bharatiya Janata Party (BJP) MLA Vijendra Gupta being marshaled out, after he moved an adjournment motion on the Aam Aadmi Party (AAP) corruption issue which was disallowed by the Speaker.

New Delhi: The high voltage drama in the Delhi Assembly Session began today with Bharatiya Janata Party (BJP) MLA Vijendra Gupta being marshaled out, after he moved an adjournment motion on the Aam Aadmi Party (AAP) corruption issue which was disallowed by the Speaker.

Gupta, who is the Leader of Opposition in the Delhi Assembly was dragged out on the Speaker's order for creating ruckus.

"Mr. Goel is Leader of Opposition but doesn't understand the sanctity of his post," an annoyed Speaker said. 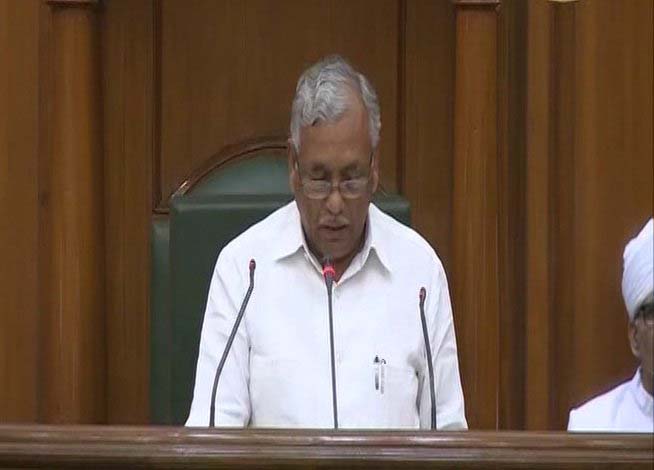 This is not the first time when Gupta was marshalled out from the House, earlier in November last year he was asked to leave the Assembly for creating 'hindrance' during Chief Minister Arvind Kejriwal's address on demonetisation.

With the Aam Aadmi Party (AAP) struggling to keep its head high amid the avalanche of controversies, the one-day special session of Delhi Assembly is already expected to be a stormy affair.

The AAP and the Opposition BJP are set to corner each other on a range of issues, including the entire debacle surrounding the Electronic Voting Machine (EVM) tampering issue.

The recent chaos surrounding expelled AAP leader Kapil Mishra and his allegations of bribery against Chief Minister Arvind Kejriwal are also bound to be raked.

The Kejriwal-led dispensation had already dubbed the recent CBI raid at the Delhi Secretariat and issuance of notice to by the Home Ministry to furnish details of its overseas funding at the session as 'political vendetta' by the Centre.

However, the Bharatiya Janata Party (BJP), which has only four members in the national capital's assembly, will try to attack the AAP government on governance and other issues. (ANI)