Dulquer Salmaan, Sunny Deol's psycho-thriller 'Chup' trailer to be out on this date

Taking to Twitter, Dulquer shared the motion poster which he captioned, "Pyaasa for more?
#ChupRevengeOfTheArtist, Trailer out on 5th September.#ChupOn23September." 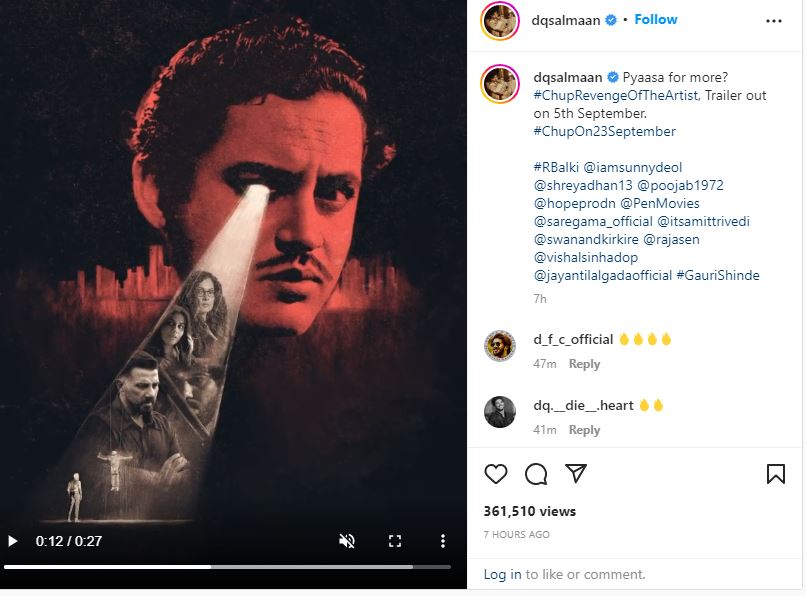 Helmed by R Balki, the film is all set to hit the theatres on September 23, 2022. Apart from Sunny and Dulquer, the film also stars Pooja Bhatt and Shreya Dhanwanthary in prominent roles.The teaser of R Balki's 'Chup' has piqued everyone's curiosity and already built huge anticipation around the film wondering what's it all about.

The film is touted as a romantic psychopath thriller. It is said that the film is a homage to master filmmaker Guru Dutt and his 1959 classic 'Kaagaz Ke Phool'. The screenplay and dialogues of 'Chup: Revenge of Artist' have been co-written by Balki and critic-turned-writer Raja Sen and Rishi Virmani. With music by composer Amit Trivedi and Vishal Sinha credited as the film's director of photography (DOP), 'Chup: Revenge of Artist' is co-produced by Pranab Kapadia and Anirudh Sharma.

Director R Balki is known for his spectacular films like 'Paa', 'Ki and Ka', 'Padman', and 'Shamitabh', which received positive responses from the critics and the audience. Meanwhile, Dulquer is currently getting a lot of praise for his recently released film 'Sita Ramam' which also starred Rashmika Mandanna and Mrunal Thakur in the lead roles.

Sunny, on the other hand, will be also seen in director Anil Sharma's 'Gadar 2', alongside Ameesha Patel and Utkarsh Sharma, and in 'Apne 2' along with his father Dharmendra, his brother Bobby Deol and his son Karan Deol. (ANI)

OMG! First look of Adnan Sami in Afghan is unbelievable