The election process in Delhi is likely to get momentum as the filing of nomination for the seven parliamentary seats in the city starts on Thursday.

New Delhi: The election process in Delhi is likely to get momentum as the filing of nomination for the seven parliamentary seats in the city starts on Thursday.

The Lok Sabha polls for seven seats in Delhi on may 12 is likely to witnes a tri-cornered contest between the Aam Aadmi Party (AAP) led by Delhi Chief Minister Arvind Kejriwal, BJP which had won all the seven parliamentary seats in 2014 elections and Congress which had ruled Delhi for over decades under the then Chief Minister Sheila Dikshit .

For the ruling AAP, it will be a litmus test as the party, despite being in the power in Delhi, had not performed well in the 2017 MCD polls. The party also had to face defeat at the Rajouri Garden Assembly by-poll. However, it managed to retain the Bawana Assembly seat. AAP which was born from a ‘movement’, had witnessed various ups and downs in the last few years as many of its prominent faces had left the party due to various reasons. Ashutosh and Ashish Khetan are among those.

Congress’ central leadership has again reposed its faith and handed the command of Delhi to is veteran leader and former Chief Minister Sheila Dikshit. It would be interesting to see on May 23, whether it benefits the party or not. 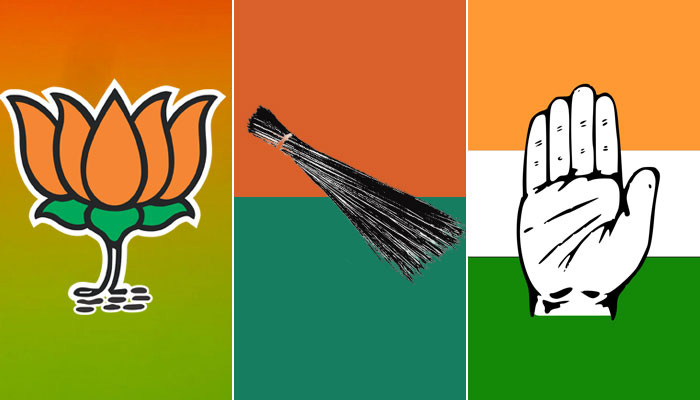 Senior AAP leader Gopal Rai had said that all its seven candidates in Delhi will file nominations from April 18 to 22.

Earlier, he told reporters that on April 18 nomination will be filed in West Delhi, while nomination for Chandni Chowk, East Delhi and North West Delhi will be filed on April 20 and on April 22 the nominations for South Delhi, North East and New Delhi. Congress had also announced that it would declare its candidates for the seven seats soon . It has, however, said that doors are still open for an alliance with AAP provided the party is willing for a seat sharing deal only for Delhi.

So far, AAP is the only party which has announced the names of all the seven candidates while the BJP and Congress is yet to release its list for the seven Lok Sabha seats.(UNI)