Samantha Ruth Prabhu on Monday shared the title along with the poster of her upcoming movie 'Kushi' on social media. See first poster on Dynamite News:

Mumbai: Indian Actor Samantha Ruth Prabhu announced the title along with the poster of her upcoming movie, 'Kushi', which was tentatively named 'VD11', co-starring Vijay Deverakonda on her social media account, on Monday.

Taking to her Instagram handle, the 'Makkhi' actor shared the poster, captioning it, "An Explosion of Joy, laughter, happiness & Love. A Grand Family experience." 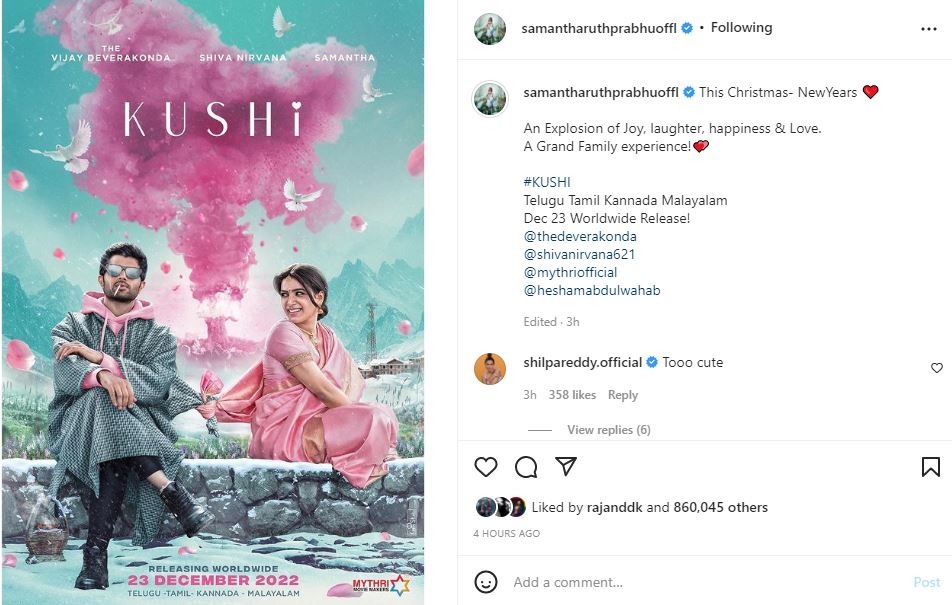 Fans who are eagerly waiting for the film bombarded the comment section with heart and fire emoticons, including fashion designer, nutritionist, and model, Shilpa Reddy, who also wrote, "Tooo cute".

After 'Mahanati', this will be Samantha and Vijay's second project together and also it is Samantha's second collaboration with filmmaker Shiva Nirvana, who previously collaborated with her on 'Majili'.Jayaram, Sachin Khedakar, Murali Sharma, Lakshmi, Ali, Rohini, Vennela Kishore, Rahul Ramakrishna, Srikanth Iyengar, and Saranya are among the cast members of the film.'

Kushi' will be released in Telugu, Tamil, Malayalam, and Kannada theatres on December 23. According to the poster, the film appears to be a love story set in Kashmir. (ANI)