Farhan Akhtar who is busy promoting his upcoming film 'The Sky is Pink,' surprised fans with his first look as a boxer from 'Toofan.'


New Delhi: Farhan Akhtar who is busy promoting his upcoming film 'The Sky is Pink,' surprised fans with his first look as a boxer from 'Toofan.'

The first-look poster shows the actor flaunting his chiseled body, washboard abs, and biceps as he is set to take on a boxer. Farhan is seen standing in a boxing ring, ready to pack a few powerful punches. "From the director of 'Bhaag Milkha Bhaag'," the poster reads. The film is slated to hit the silver screens on 2 October 2020.

The film is produced by Ritesh Sidhwani, Farhan and Rakeysh Omprakash Mehra who is also directing. 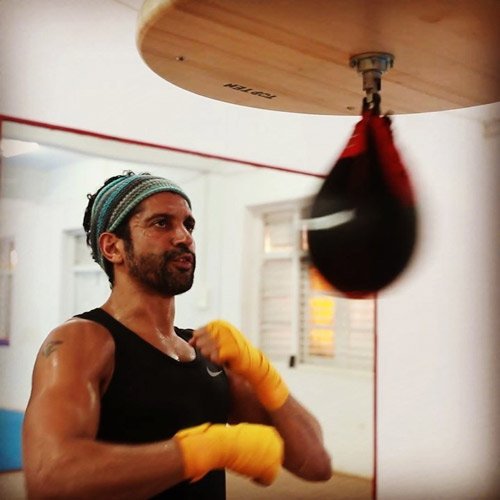 Also Read: The Sky Is Pink trailer is a perfect blend of romance, drama, hope, tragedy

The director-actor duo had earlier collaborated for the biopic based on Indian athlete Milkha Singh, 'Bhaag Milkha Bhaag,' which won Farhan a number of awards for his portrayal of the athlete. Reportedly, unlike 'Bhaag Milkha Bhaag', the upcoming sports drama would not be a biopic but a fictional story. The 'Zindagi Na Milegi Dobara' actor who is quite active on the photo-sharing application, Instagram shared several posts about his preparation for the film.

Farhan will also be seen in Shonali Bose's 'The Sky Is Pink' for which he has reunited with his 'Dil Dhadakne Do' co-star Priyanka Chopra. The film also features 'Dangal' fame Zaira Wasim in a pivotal role. (ANI)