Ayushmann Khurrana on Monday revealed the poster of his upcoming social comedy film 'Doctor G' which, he said, would hit the theatres on 14 October. Read more on Dynamite News:

Mumbai: Ayushmann Khurrana on Monday revealed the poster of his upcoming social comedy film 'Doctor G' which, he said, would hit the theatres on October 14.

Taking to Instagram, the actor dropped the first-look poster of his upcoming film 'Doctor G' and revealed that the movie will hit the theatres in October this year. 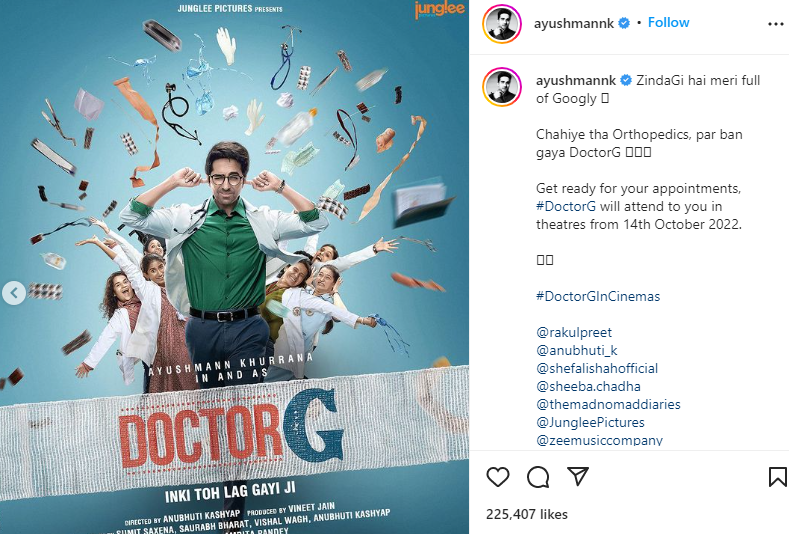 Along with the poster, Ayushmann wrote, "ZindaGi hai meri full of Googly. Chahiye tha Orthopedics, par ban gaya DoctorG. Get ready for your appointments, #DoctorG will attend to you in theatres from 14th October 2022."

Directed by Anubhuti Kashyap, the 'Doctor G' cast also includes Rakul Preet Singh as Dr Fatima Duggal and Shefali Shah as Dr Nandini Bhatia in prominent roles. Makers started shooting for the film on July 14, 2021, in Bhopal. This marks the first-ever collaboration of the 'Vicky Donor' actor with Rakul Preet.

Earlier this year, Ayushmann shared the look from the film on the occasion of Doctor's Day. He captioned the post, "G se Gynecologist . G se Gupta. That's our #DoctorG. Doctor Uday Gupta aka #DoctorG and team ki Taraf se wishing all the G se Genius doctors a #HappyDoctorsDay".

Ayushmann is known for his versatility, and with each of his performances, the actor always tries to deliver something new to the audience, and with 'Doctor G', he is all set to portray the role of a Gynaecologist for the first time in his career.

'Doctor G' is a social-comedy film which will also deliver a special message to the audience. (ANI)