The new ministers to be inducted in latest round of cabinet expansion includes, Ishwar Pokhrel and Dr. Yuvraj Khatiwada from the Communist Party of Nepal-Unified Marxist Leninist, along with Ram Bahadur Thapa "Badal" and Matrika Yadav from the Maoist Center.

Prime Minister Oli has given the portfolio of Defense Ministry to UML leader Pokhrel, who will also be leading the ministers into the cabinet.

Likewise, the Oli led government has given the portfolio of Ministry for Home Affairs to Ram Bahadur Thapa "Badal", the former guerilla commander during Maoist insurgency. Dr. Yuvraj Khatiwada, the former Governor as well as the Vice- Chair of the National Planning Commission have been appointed as the Finance Minister.

Matrika Yadav has been given the responsibility of looking after the Ministry of Commerce and Supplies.

K.P. Sharma Oli, heir the portfolio of the First Prime Minister of Nepal in 15th of February after it's adaptation of the federal system as per the constitution promulgated in 2015. But the slow expansion of the cabinet is taking toll against the undergoing and to be started development projects.

"It's going to be two weeks of KP Oli's appointment as Prime Minister of Nepal but the pace of the cabinet expansion is going too slow. This ultimately hampers the works that are to be carried by various bodies in the government," Rajendra Dev Acharya, a political analyst and political critic said. 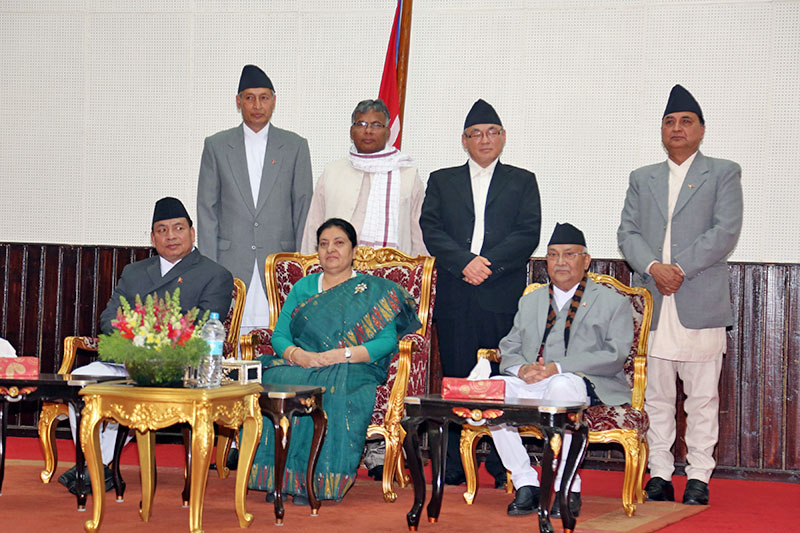 "The government should take some instance on it. In my opinion we should have some mandatory provisions of forming a complete cabinet with limited time frame to overcome this sort of tendency," Acharya added.

The section 76's sub-section 1 of the Constitution of Nepal has the provision of electing the leader from the major party in the parliament to be nominated as Prime Minister and can form the government.

The sub section 2 of the same section in Nepali constitution also has the provision for the appointment of new Prime Minister in case any of the parties failed to garner complete majority. It has stated that the President can appoint the leader of a party who can complete the majority mark by getting support from other incumbent parties.

But the government formed after garnering support from two or more than two parties is mandated to testify the support in parliament within 30 days of its formation.

In case the government fails to get endorsed then the President should give another chance to garner majority and upon the repeated failure the President can dissolve the House of Representative and call for another election within 6 months.

The constitution also has fixed the number of ministers in the center with a number limit of 25 seats inclusive of Prime Minister, Deputy Prime Minister, Ministers, State Ministers and Minister Aide.

The Section 76's subsection 9 of the Constitution of Nepal has the provision limiting the number of cabinets as well as ensures the inclusiveness in the government which also will see members from the State assemblies too. (ANI)

PM Modi to embark on 2-day visit to Nepal