Russia's Andrey Rublev progressed to his second French Open Quarter-Final on Monday after his Italian opponent Jannik Sinner retired due to an apparent knee injury during the third set of their fourth-round match at the ongoing French Open 2022 on Monday. Further details on Dynamite News:

Paris: Russia's Andrey Rublev progressed to his second French Open Quarter-Final on Monday after his Italian opponent Jannik Sinner retired due to an apparent knee injury during the third set of their fourth-round match at the ongoing French Open 2022 on Monday.

Sinner dominated the first set, taking a 6-1 lead. But during the second set the Italian started struggling with his movement. Rublev was able to turn match in his favour and took the lead of 1-6, 6-4, 2-0 before Sinner retired due to his injuries.

Now in the quarter-finals, the Russian will meet the Croatian player Marin Cilic, who shocked the world by defeating the World number two Daniil Medvedev of Russia in their last 16 clash.

Earlier, Rafael Nadal set up a clash with Novak Djokovic in the ongoing French Open 2022 after a barnstorming fourth-round battle with Felix Auger-Aliassime on Sunday.

The fifth seed will next face Djokovic after the top seed defeated Diego Schwartzman 6-1, 6-3, 6-3. 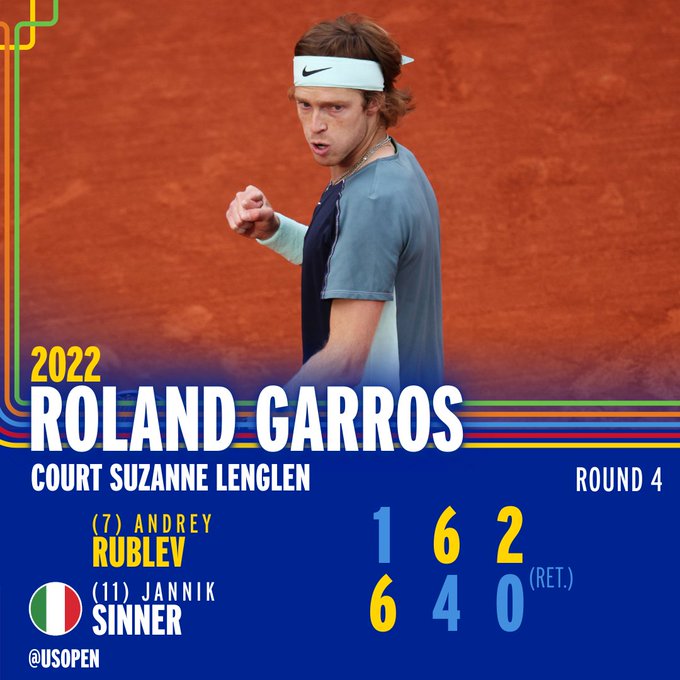 Also, Alexander Zverev on Sunday cruised into the quarter-finals of the French Open 2022 after defeating Bernabe Zapata Miralles.

It may have been a straight-sets win for the German at Roland Garros, but the path to victory was anything but smooth for the third seed against Bernabe Zapata Miralles.

Zverev clinched a marathon opening set in a dramatic tie-break and was forced to recover from a breakdown in the second before going on to seal a 7-6(11), 7-5, 6-3 triumph over the No. 131-ranked Spanish qualifier.

On the other hand, the No. 6 seed Carlos Alcaraz stormed into the second Grand Slam quarter-final of his young career with a commanding performance over Karen Khachanov on Sunday evening at the ongoing French Open 2022.

After quickly snatching up the first two sets, Alcaraz stayed calm as he was dragged into a battle by the No.21 seed in the third.

The Spaniard reached his first Roland Garros quarter-final with a 6-1, 6-4, 6-4 win against 21st seed Karen Khachanov. The sixth seed will next play third seed Alexander Zverev for a place in his first major semi-final.

Rune will now take on Casper Ruud in the quarter-final who defeated Hubert Hurkacz. The eighth seed Ruud became the first player from Norway to enter a grand slam quarter-final with a 6-2 6-3 3-6 6-3 win over Hurkacz. (ANI)

Maria Sharapova moves up by 29 spots in WTA Rankings