Prime Minister Narendra Modi presented a nine-point programme to take action against fugitive economic offenders during his address in the second session of the ongoing G20 Summit here.

Ministry of External Affairs (MEA) Spokesperson Raveesh Kumar took to his Twitter handle to share an image of the programme that the Prime Minister presented at the G20 summit earlier today.

In his intervention at the 2nd session at #G20Summit on international trade, international financial and tax systems, PM @narendramodi presented a 9-point programme to take action against fugitive economic offenders. pic.twitter.com/2d3aguBtf5

As part of the programme, Prime Minister Modi suggested "strong and active" cooperation among the G-20 nations. He highlighted the importance of cooperation in legal processes such as "effective freezing of the proceeds of crime; early return of the offenders and efficient repatriation of the proceeds of crime should be enhanced and streamlined", so as to "deal comprehensively and efficiently with the menace of fugitive economic offenders".

He further suggested joint efforts to be made by the G20 nations to form a mechanism that denies entry and safe havens to all fugitive economic offenders. He stressed the "effective" implementation of the principles of the United Nations Convention Against Corruption (UNCAC) and the United Nations Convention Against Transnational Organised Crime (UNOTC). The Prime Minister underscored the need to implement features related to "International Cooperation" in the two conventions.

The Prime Minister said that the Financial Action Task Force (FATF) should be called upon "to assign priority and to focus on establishing international co-operation that leads to a timely and comprehensive exchange of information between the competent authorities", adding that the FATF should be tasked to formulate a standard definition of fugitive economic offenders. 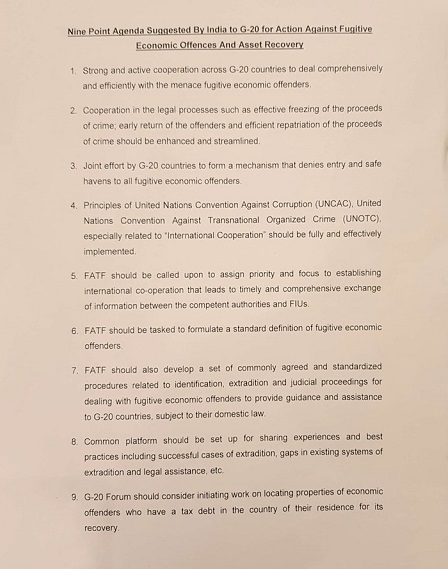 The programme suggested the setting up of a common platform "for sharing experiences and best practices including successful cases of extradition, gaps in existing systems of extradition and legal assistance."

The three fugitives are involved in separate scams to the tune of billions of dollars. (ANI)