Golf with Trump was `not political endorsement`, insists McIlroy

Issuing a statement on his official Twitter handle, the World No. 3 said, "I don't agree with everything my friends and family say or do, but I still play golf with them."


Washington D.C: World No. 3 Golf player Rory McIlroy has responded to the criticism which he has been facing following his round of golf with U.S. President Donald Trump, saying it was no political endorsement.

McIlroy sat with Trump for all 18 holes in the golf cart to step up his rehabilitation from injury for next month's WGC-Mexico Championship on Sunday at the Trump International Golf Club in Florida. 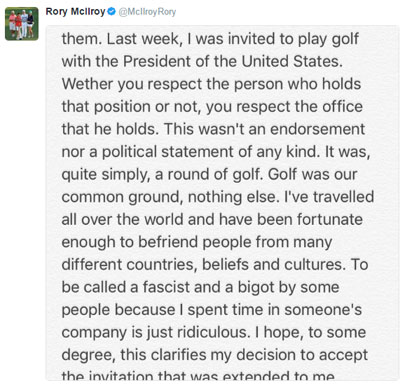 Issuing a statement on his official Twitter handle, the World No. 3 said, "I don't agree with everything my friends and family say or do, but I still play golf with them."

"Last week, I was invited to play golf with the President of the United States. Whether you respect the person that holds that position or not, you respect the office he holds."

"This wasn't an endorsement nor a political statement of any kind. It was, quite simply, a round of golf. Golf was our common ground, nothing else," he insisted.

Also Read: Trump does it again, brands media as "great danger to our country"

The 27-year-old further said that he has travelled all over the world and has been fortunate enough to befriend people from many different countries, beliefs and cultures

"To be called a fascist and a bigot by some people because I spent time in someone's company is ridiculous," he said.

"I hope, to some degree, this clarifies my decision to accept the invitation that was extended to me," he added. (ANI)

India's purchase of US crude oil increased 10 fold to 250,000 bpd in past 3 years: US Energy Secretary