As pollution levels in the national capital hovered close to emergency levels, Delhi Chief Minister Arvind Kejriwal on Wednesday said the odd-even scheme could be extended, if the need arises.

New Delhi: As pollution levels in the national capital hovered close to emergency levels, Delhi Chief Minister Arvind Kejriwal on Wednesday said the odd-even scheme could be extended, if the need arises.

"If the need arises, we will extend it (odd-even scheme)," Kejriwal said in response to media queries on whether the road rationing initiative, aimed at curbing vehicular pollution, will be further extended. Delhi-NCR gasped for breath today as the noxious smog resulting from raging farm fires and unfavourable weather pushed pollution levels in the region towards the "emergency" zone for the third time in the last 15 days.

Kejriwal blamed stubble burning in neighbouring states for repeated episodes of smog in Delhi and said it has hit Delhi's image worldwide.

"I remember German Chancellor Angela Merkel was in Delhi a few days ago ... when a public health emergency was declared. What kind of image of Delhi she must have carried to her country," he said. The chief minister said Delhi's neighbouring states, especially Haryana and Punjab, are burning crop residue disregarding strict directions from the Supreme Court.

"The air quality oscillated between the good and moderate categories in the early part of this season because of our continuous efforts to check pollution. But it deteriorated due to the intrusion of stubble plume from Punjab and Haryana," he said. 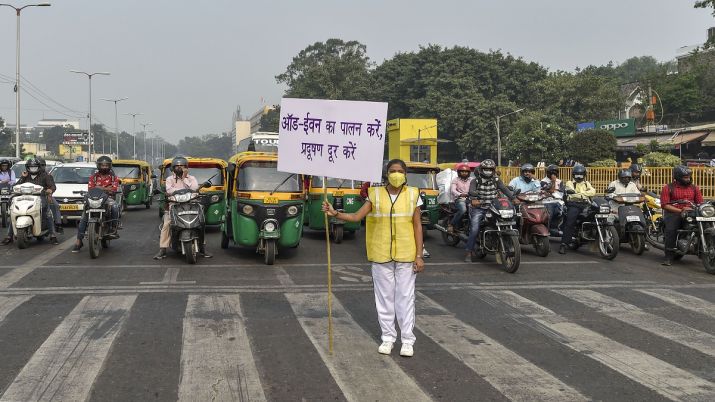 "The number of farm fires reduced in between due to rains in Punjab and Haryana. It led to a decline in Delhi's pollution. The incidents of stubble burning have shot up again. These states are not even following the Supreme Court's directions. Delhi people are suffering because of it," he said.

Kejriwal reiterated that paddy straw can be used to produce compressed natural gas and coal which will also increase the income of farmers.

"I have met many experts. I am myself an engineer. Stubble can be converted into CNG. The foundation stone of an industry that can convert paddy straw into CNG has be laid. I have talked to Indraprastha Gas Limited and they are ready to procure all CNG produced from stubble," he said.

Many factories, which can convert stubble into coal, have come up in Punjab. National Thermal Power Corporation Limited is ready to purchase all the coal produced through this method, he said, adding these measures will also help generate employment and increase the income of farmers. According to the government's air quality monitor, SAFAR, the share of stubble burning in Delhi's pollution is predicted to be 22 per cent on Wednesday. It was 25 per cent on Tuesday.(PTI)

Arvind Kejriwal: No need of odd-even scheme now as skies have cleared up

CM Kejriwal: Pollution problem can be solved in a year if there is political will

Will take decision on extending Odd-Even scheme on Nov 18: Kejriwal