After winning a million hearts with his power-packed performance in 'Judgementall Hai Kya', actor Rajkummar Rao is all set to treat his fans with his next outing 'Made In China', co-starring Mouni Roy.


New Delhi: After winning a million hearts with his power-packed performance in 'Judgementall Hai Kya', actor Rajkummar Rao is all set to treat his fans with his next outing 'Made In China', co-starring Mouni Roy.

Boman Irani, who also stars in the film, shared the first motion poster of the movie. He also divulged that the trailer will revealed next week. 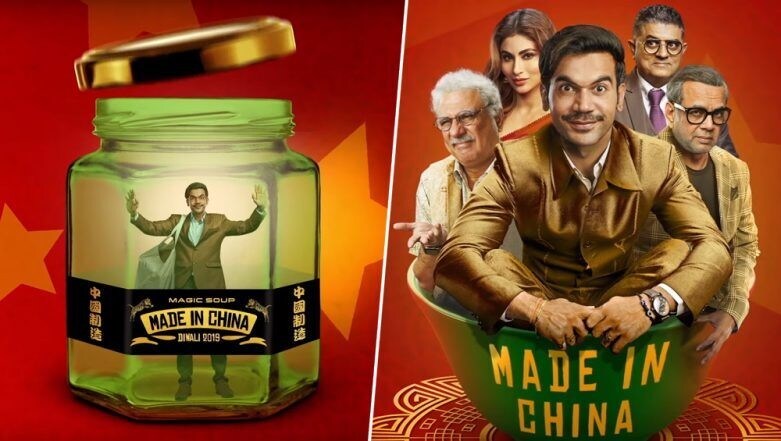 "Iss Diwali, #IndiaKaJugaad hoga Soup-er Hit! #MadeInChina Trailer out in one week! #FirstLook," he wrote alongside the motion poster.

The motion poster is quite intriguing and will leave the viewers wanting for more. The quirky clip features Rajkummar's character, who is dressed up as a middle-class working man in a brown suit paired with a jhola, going inside a glass jar marked 'Made In China'.

He soon jumps out of it and eventually falls into a bowl with the same tag, wherein he is joined by the characters of Mouni, Boman, Gajraj Rao, and Paresh Rawal.

Along with a quirky vibe, a fun-filled Gujarati song plays in the background throughout the motion poster. The tagline reads, "India ka jugaad."

The film is based on the life of a struggling Gujarati businessman, Raghu (Rajkummar), who embarks on a journey to China in order to make his business flourish. The hilarious journey and several experiences help the 'Newton' actor to become a successful entrepreneur later. Mouni will be seen in the role of Rajkummar's wife (Rukmini).

The film has been helmed by National Award-winner Mikhil Musale, who won the best director for his 2016 drama-thriller 'Wrong Side Raju'. Dinesh Vijan of 'Hindi Medium' fame is producing the flick.

'Made in China', originally set to hit the big screens on August 15, will now be releasing on Diwali this year.

Rajkummar will be seen next in the horror-comedy 'Rooh Afza' opposite Janhvi Kapoor. Meanwhile, Mouni will also next star in 'Brahmastra'. Diwali weekend will also see the release of 'Housefull 4' and 'Saand Ki Aankh'. (ANI)

'Made in China' trailer: Rajkummar brings 'soup-er hit jugaad of the year'

Get into festive mood with 'Odhani' from Rajkummar's 'Made in China'

Made of magic and love, here's 'Sanedo' from 'Made in China'