Nitish Kumar, Hemant Soren, me and other leaders will come together in 2024 LS election: Mamata

West Bengal Chief Minister Mamata Banerjee at the Trinamool Congress (TMC) meeting today announced that Nitish Kumar, Hemant Soren, and herself with other leaders will come together for the 2024 general election. Read more on Dynamite News:

Kolkata: West Bengal Chief Minister Mamata Banerjee at the Trinamool Congress (TMC) meeting today announced that Nitish Kumar, Hemant Soren, and herself with other leaders will come together for the 2024 general election.

"Politics is not an easy thing to do, I remember working hard and fighting for winning the elections. People who were not present there will not understand how difficult it was", said the CM.

"Today there are certain media, who are just waiting to disgrace TMC, every election they come up with something," she said. 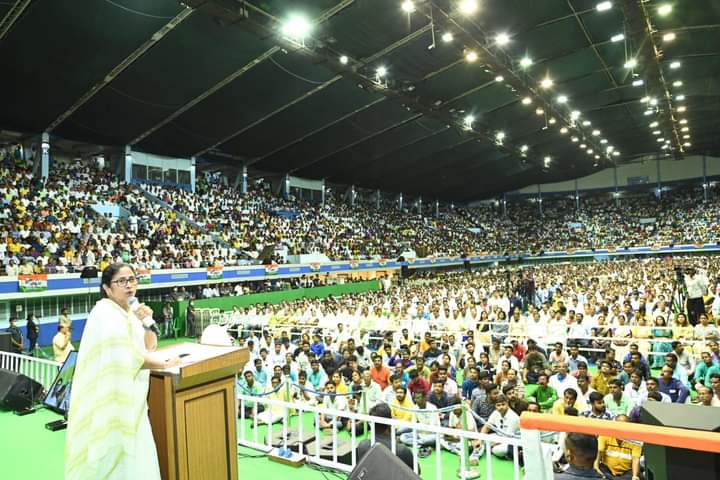 Mamata said, "Today there are certain media, who are just waiting to disgrace TMC, the false news can't always go on, it will not go on forever. You all are showing news from sources that this much jewelry has been found in this person's house but has it been proved in court yet? We believe in the law. TRP will not be high always. Every election they come up with something".

Senior Trinamool Congress (TMC) leader Anubrata Mondal on Thursday appeared at the MP/MLA court in Bidhannagar in connection with the 2010 Mangalkot blast case, adding to this the CM in today's meeting said, "If you feel you can keep Anubrata Mondal in jail and take his seat then you are wrong. That will never happen".

Mondal was the TMC president of Birbhum district.

Mamata said, "Birbhum doesn't know how to lose, and we will all prove it together. You all will have to be ready to bring him back with respect when he comes back".

She urged all the MLAs to fight three times till the time Mondal comes back.

Slamming the BJP government, Mamata said, "ED and CBI are their pets, every morning they get up and go raid a different house of a TMC leader".

"An animal that has been hurt is more dangerous than the one that has not been hurt," she said.

She called out the BJP government saying, "If you want to fight us fight with us politically. In 2021 you have fought you broke my leg it was really bad, but today I can function with my mental strength. I want to say that an animal that has been hurt is more dangerous than the one that has not been hurt. I don't hurt anyone useless you cause me harm".

Talking about the unveiling of the hologram statue of Netaji Subhas Chandra Bose in Delhi she added, "I received a letter from an undersecretary stating PM will inaugurate the statue at 7 am you be there by 6 am, am I some servant?"

The CM claimed that Bangladesh PM Sheikh Hasina during her visit to India wanted to meet the CM of Bengal but wasn't allowed.

"This is the first time I saw that the PM of Bangladesh came and wanted to meet me but was not allowed. I don't know why they are so angry, they didn't let me go to Chicago", CM added.

She urged everyone to remain strong as the BJP government and the agencies in the court of law will ultimately not find anything. (ANI)

Refrain from causing inconvenience to anybody: Injured Mamata Banerjee to supporters from hospital