Palanisamy wins vote of confidence in TN assembly amidst uproar

The assembly was facing its first floor test in 30 years, and there was a debate over the ballot, with the Dravida Munnetra Kazhagam (DMK), the Congress and the Indian Union Muslim League expressing mixed views about the confidence vote.

Chennai : Amid the uproar in the Tami Nadu Assembly during Saturday's much-anticipated floor test, Chief Minister Edappadi K. Palanisamy won the vote of confidence with 122 MLAs supporting him.
The floor test took place in Block Two of the Tamil Nadu assembly.
Earlier, the Congress staged a walk out from the assembly, while Speaker P. Dhanapal ordered the assembly police to evict the Dravida Munnetra Kazhagam (DMK) MLAs from the house as soon as the assembly resumed functioning after getting adjourned following an uproar over the secret ballot process.

Also Read: Palanisamy takes oath as new Tamil Nadu CM
"You tore my shirt and insulted me. I am doing my work abiding by the law," Speaker Dhanapal was quoted, as saying to the MLAs.
However, DMK working president M.K. Stalin alleged that his shirt was torn off when the assembly police forcefully evicted his party MLAs and the Speaker tore of his shirt himself and blamed the MLAs of the DMK for it.
"We were told that assembly will reconvene at 3 p.m., but at 2 p.m. police came and tried to forcefully evict us. My shirt was also torn," Stalin said.
The assembly was adjourned twice on Saturday, once at 1 p.m. and again at 3 p.m.
Papers were torn and chairs thrown during the ruckus in the house. 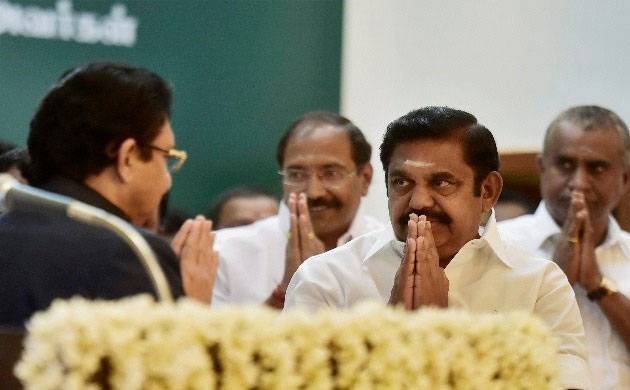 The assembly was facing its first floor test in 30 years, and there was a debate over the ballot, with the Dravida Munnetra Kazhagam (DMK), the Congress and the Indian Union Muslim League expressing mixed views about the confidence vote.

Also Read: Panneerselvam camp sacks Sasikala and Dinakaran from AIADMK primary membership
DMK's M.K. Stalin questioned the haste with which the ballot process was being done. He also emphasised upon the importance of democratic means in the state.
"Democracy will be fullfilled, only when the secret ballot voting is done. Floor test should be done on another day. Why the hurry when the governor has given 15 days time?" Stalin said.
Ahead of the crucial 'floor test', Panneerselvam appealed to AIADMK MLAs to vote against Palanisamy. "MLAs should be given time to hear the views of their constituency people. Time should be given till then," he said, during the assembly session.
Palanisamy took oath as Tamil Nadu's 13th Chief Minister on Thursday. A total of 31 other All India Anna Dravida Munnetra Kazhagam (AIADMK) MLAs were also sworn in. (ANI)

Palaniswami to be new CM of Tamil Nadu