A day after putting out the rib-tickling trailer of 'Pati, Patni Aur Woh', the team has finally wrapped up shooting for a song choreographed by Farah Khan.


New Delhi: A day after putting out the rib-tickling trailer of 'Pati, Patni Aur Woh', the team has finally wrapped up shooting for a song choreographed by Farah Khan.

"Its a pack up on the song it's an official wrap for 'Pati, Patni Aur Woh'," said Farah in a video shared by 'Chintu Tyagi' aka Kartik Aaryan on Instagram on Tuesday. 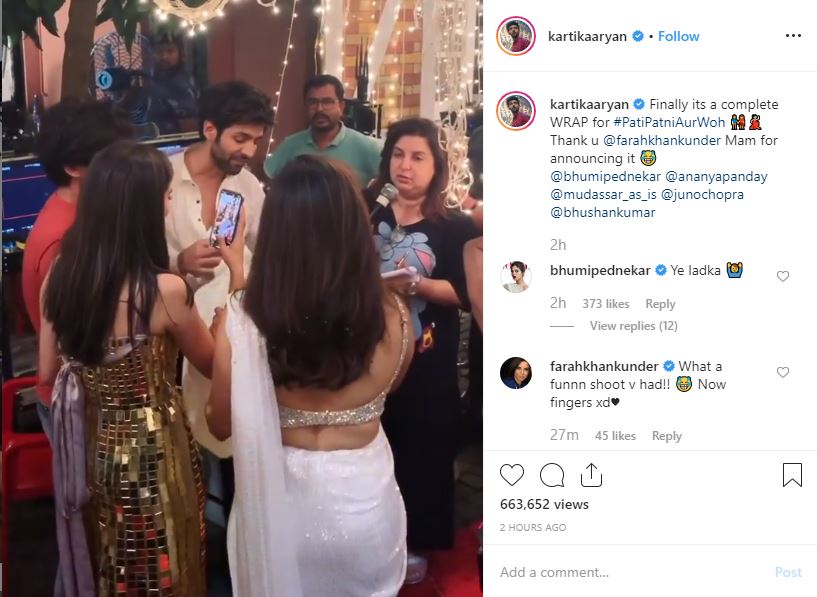 Farah had been choreographing a seemingly party number for the upcoming feature as Kartik along with co-stars Ananya Panday and Bhumi Pednekar has been documenting it on social media without particularly mentioning its title.

The wrap-up clip shared by the actor features a set illuminated with fairy lights all around and the leading ladies dressed in shimmery dresses. While Farah took the mic to announce "pack-up" and "wrap", she is later seen engaged in a banter with Kartik who throws his blazer over to the director, interrupting her in the speech.

The film's trailer came out on Monday and featured Chintu narrating a tale of how his father made him study, work and then get married - all on the pretext of achieving 'a peaceful life' at every stage.

It further showed how Tyagi juggles to maintain a balance between his married life and an extra-marital affair. In all, the trailer is a sure sign that the movie will be a full-time entertainer.

It is a remake of the 1978 film with the same name and also features Aparshakti Khurrana in a supporting role. The movie is directed by Mudassar Aziz and produced by Bhushan Kumar, Renu Ravi Chopra, and Krishan Kumar.

The movie is slated to release on December 6. (ANI)