By getting maximum votes in their poll, Priyanka Chopra stands just after Beyonce, who has emerged as the most beautiful women in the world.

Mumbai: The renowned actress Priyanka Chopra gets one more feather added to her success cap.

According to a poll run by website Buzznet, she is the second most beautiful woman in the world.

By getting maximum votes in their poll, the 34-year-old actress stands just after Beyonce, who has emerged as the most beautiful women in the world. 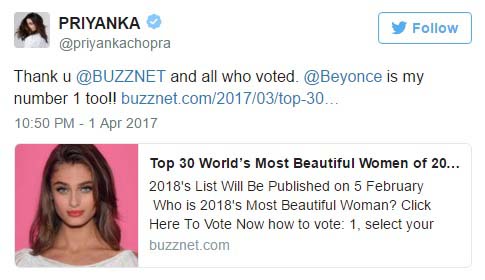 She took to Twitter to thank Buzznet for the achievement, "Thank u @BUZZNET and all who voted. @Beyonce is my number 1 too!!"

In this race, PeeCee left people like Angelina Jolie, Emma Stone and Hillary Clinton behind.

The actress is busy to promote her movie Baywatch which is all set to release on May 26.  (With agency inputs)