Rahul Gandhi on Saturday said if Prime Minister Narendra Modi can waive off loans of industrialists like Anil Ambani, Mehul Choksi, Nirav Modi then the Congress party can waive off farm loans too.

Jagdalpur: Rahul Gandhi on Saturday said if Prime Minister Narendra Modi can waive off loans of industrialists like Anil Ambani, Mehul Choksi, Nirav Modi then the Congress party can waive off farm loans too.

"If chowkidaar can waive off loans of rich people then the Congress can waive off loans of farmers. The previous BJP government claimed that the government did not have money to give fair MSPs to farmers. We have proved that it can be done after forming the government. Farmers pay insurance premiums but do not receive insurance when their crops are damaged. This money goes straight to the pocket of people like Anil Ambani," Rahul said while addressing a public rally here.

"I do not make false promises. I want our relationship to be that of truth. I thank all the people of Chhattisgarh for supporting us," Rahul said.

Talking about the demonetisation move by the Modi government, the Congress president said: "During demonetisation, did you see people like Anil Ambani, Mehul Choksi, Nirav Modi in queues? If demonetisation was an attack against black money, then why did only the innocent and honest people suffer?"

Rahul started his speech by remembering 40 CRPF personnel who lost their lives in Pulwama terror attack on February 14 and also observed a two-minute silence to express condolence. He said, "Jawans who sacrificed their lives in Jammu and Kashmir, who were martyred, we remember them. Our condolences are with their families."

Fulfilling the promise made in the assembly polls held in December last year, Rahul returned the documents at a convention on tribal farmers' rights, 'Adivasi Krishak Adhikar Sammelan' in Dhuragaon village. 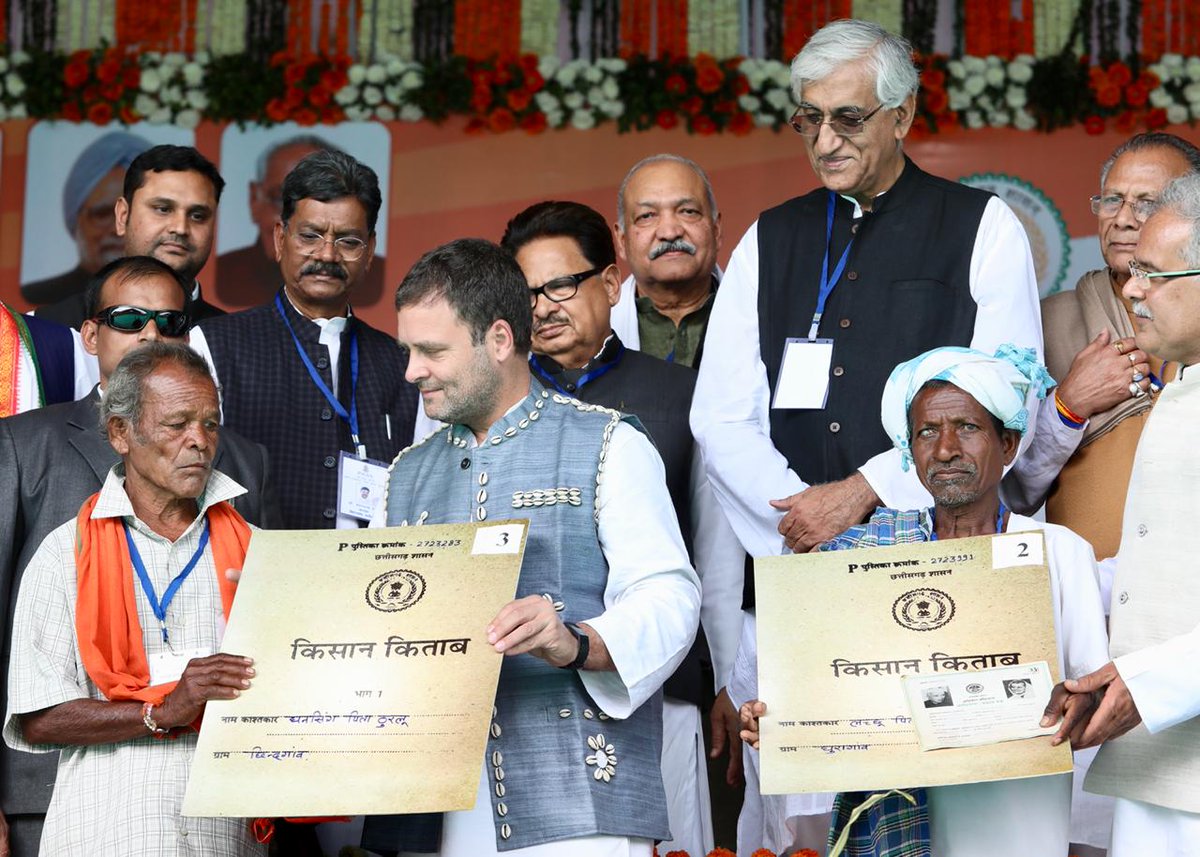 The newly elected Congress government in Chhattisgarh has decided to return the land of farmers in Bastar district acquired by the government in 2008 for a Tata Steel plant project in the region which remained unused after the project was scrapped.

In 2005, Tata Steel had signed an agreement with the then Raman Singh-led BJP government in the state for setting a steel plant with an investment of around Rs 19,500 crore in Lohandiguda region but failed to implement it. (ANI)