Selena Gomez took to Twitter and posted a short video clip of her upcoming song.


Los Angeles: Selena Gomez fans, Rejoice! The pop sensation is all set to come up with her new music and it is going to make everyone go insane.

The 24-year-old singer took to Twitter and posted a short video clip of her upcoming song.

She captioned the video, "Fetish. Thursday." 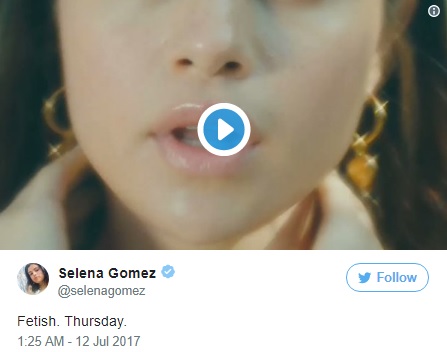 It means her new song will be coming out on Thursday, July 13.

The 'Same old Love' hit-maker has been sharing photos of the music video including a behind-the-scenes photo beside a broken glass that was filled with a red beverage and strawberries as well as sitting on the floor of a hallway in what appears to be a family home.

She also revealed the official cover art of the song on July 7. The lyrics of the song give us those same, dark vibes as 'Bad Liar'. (ANI)