Shraddha Kapoor the bubbly and charming girl of Bollywood, once again graced the cover of the magazine Grazia.


New Delhi : Shraddha Kapoor the bubbly and charming girl of Bollywood, once again graced the cover of the magazine Grazia.

The actor is stealing the limelight with her Surbhi Shukla styled ensemble on the cover page of fashion and gossip magazine, whose August issue theme is 'Throwback Trends.

The diva is sporting red polka dot dress that has frills all around, paired with black see-through stilettos. Accessorised with simple earnings and she completed her look with minimal makeup and rosy lips. 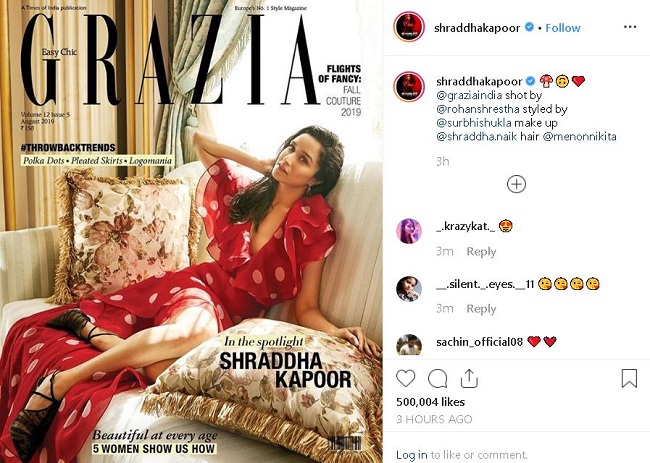 Shraddha earlier aced the cover of Grazia's November issue in 2017, in which she looked ravishing wearing a red turtleneck top.On the work front, the 32-year-old actor will soon be seen starring against 'Baahubali' actor Prabhas in  Saaho which is helmed by Sujeeth and produced by V. Vamsi Krishna Reddy and Pramod Uppalapati.

The movie has been shot in Telugu, Tamil, and Hindi simultaneously at a number of stunning locations in and out of the country and is slated to hit the theatres on August 30, this year. (ANI)

Not Shraddha, Parineeti Chopra will cast for Saina Nehwal biopic