Sidharth Malhotra has finally gone ahead and done it. The two stars have come together to launched the commercial with an interesting Twitter conversation

New Delhi: Sidharth Malhotra did it! Kneeling down before the lady, he asked for her hand forever, and add on to that was the beautiful ring he gifted.

The lady is none other than our very own global icon Priyanka Chopra.

Hold on! Before the wings of your imagination take a flight, let us check out the latest commercial for Nirav Modi jewelleries.

The stars launched the commercial with an interesting Twitter conversation, where Sid wrote, "Hey @priyankachopra Everyone's talking about us.Aren't you glad you said yes !" to which PeeCee replied, ".@S1dharthM, Cute. But people are mostly talking about me. and the ring!" 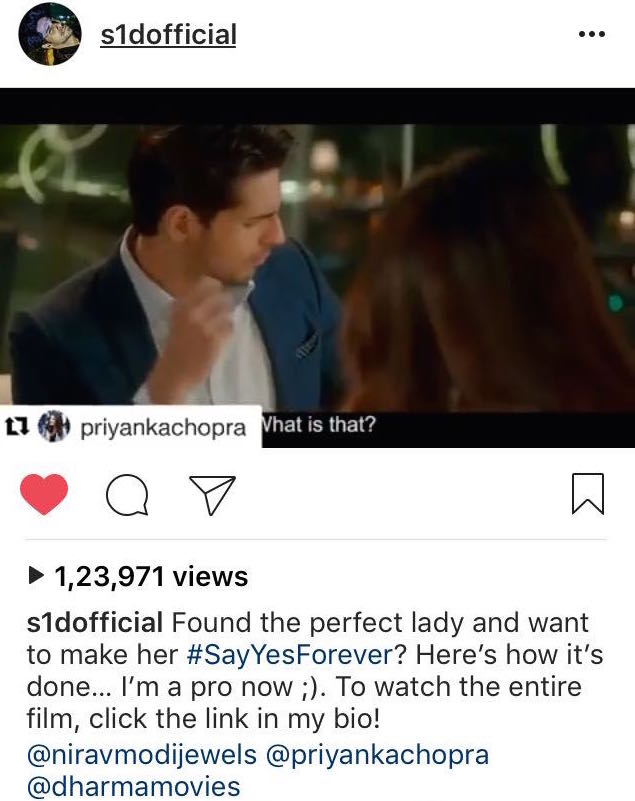 The two stars have come together for a beautiful ad for the jewelry brand, which shows a couple setting ultimate proposal goals for all the people out there!

The two-and-half-minute video shows Priyanka Chopra and Sidharth show quite a chemistry.

As Sidharth was on his knee, figuratively speaking, Priyanka demurred but only for a second. And then, she said yes. Mind you, Priyanka was in no mood to say yes. The Quantico star believes people take advantage of her good nature — her boss, colleague, friend and even sister — take her for granted because she says yes too easily. But we guess Sidharth’s charm did it for PeeCee. After being spellbound for a moment, the damsel says a big YES to her knight.

Making things clearer, she then wrote, "@S1dharthM lol, you think it was just YOU who got me to say yes? Who wouldn't #SayYesForever to @niravmodijewels" (with ANI inputs)

Still wondering what to wear this Valentine's? Here's the Bollywood-inspired ultimate style guide!