The video was posted by an unidentified user with a caption, "King Kohli's hotel room", and it went viral on social media. Read on for details:

Perth: Virat Kohli has condemned a breach of privacy in his hotel room in Perth by a fan, who shot a video of his room and posted it on social media.

The video was posted by an unidentified user with a caption, "King Kohli's hotel room", and it went viral on social media.

Posting a viral video on his Instagram, Kohli said: "I understand that fans get very happy and excited seeing their favourite players and get excited to meet them and I've always appreciated that. 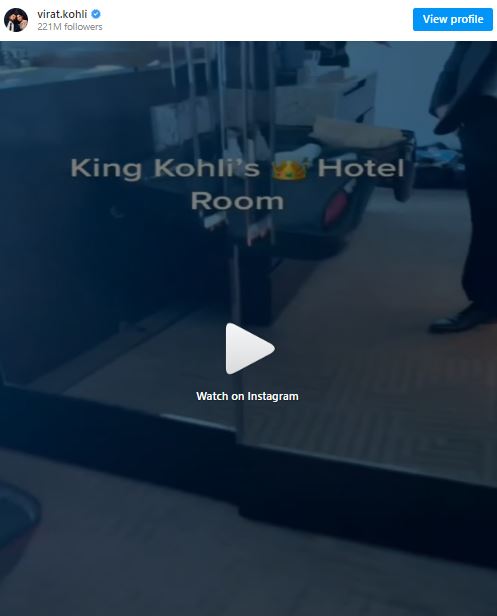 "But this video here is appalling and it's made me feel very paranoid about my privacy. If I cannot have privacy in my own hotel room, then where can I really expect any personal space at all?? I'm NOT okay with this kind of fanaticism and absolute invasion of privacy. Please respect people's privacy and not treat them as a commodity for entertainment."

Commenting on Kohli's post, Australian opener David Warner expressed anger at the incident saying " This is ridiculous, totally unacceptable. Was this @crownperth"

Kohli's wife and Bollywood actress Anushka Sharma too criticised the matter of act.

Sharing the viral video on Instagram story, Anushka wrote, "Have experienced few incidents, where fans have shown no compassion or grace in the past but this really is the worst thing. An absolute disgrace and violation of a human being and anyone who sees this and thinks celebrity ho! Toh deal karna padega should know that you are also part of the problem."

"Exercising some self-control helps everyone. Also, if this is happening in your bedroom then where is the line," she added.

According to ESPNCricinfo, the hotel, Crown Towers, has apologised for the incident and said "the individuals involved have been stood down and removed from the Crown account".

"We unreservedly apologise to the guest involved and will continue to take the necessary steps to ensure this remains an isolated incident," ESPNCricinfo quoted hotel management as saying in a statement.

"Crown has taken immediate steps to rectify the issue. The individuals involved have been stood down and removed from the Crown account, and the original video was swiftly removed from the social media platform.

"Crown is conducting an investigation with the third-party contractor and will take any further steps necessary to ensure an incident of this nature does not happen again. We are also cooperating with the Indian Cricket team and the International Cricket Council to convey our apologies and will continue to work with them as we progress the investigation." (Agencies)

Team needs to work on 'quite a few' areas: Virat Kohli