Sushant Singh Rajput took his Twitter and shared an adorable photo with her co-star Kriti.

Mumbai: Sushant Singh Rajput and Kriti Sanon are all set for their upcoming film 'Raabta' and are leaving no stone unturned for promoting the movie.

The chemistry between the two in the trailer has already grabbed everyone's eye balls. 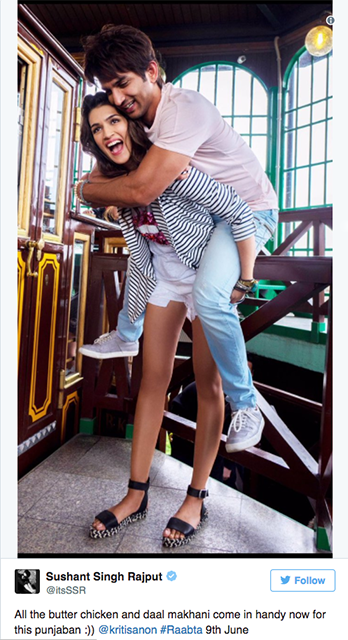 On Tuesday, the ' MS Dhoni' star took to Twitter and shared an adorable photo with her co-star Kriti.

He captioned the snap, "All the butter chicken and daal makhani come in handy now for this punjaban :)) @kritisanon #Raabta 9th June."

In the photo, Kriti is seen giving a piggy back ride to Sushant.

To this, Kriti replied, "Haha.. Ya.. But the desserts you had made it tougher for me!"

The movie also stars Jim Sarbh as an antagonist as well as a cameo by Rajkummar Rao which will see the actor play a 324-year-old.

Directed by debutant Dinesh Vijan, ' Raabta' is slated to hit the screens on June 9.(ANI)