Golfer Aditi Ashok is currently ranked second after another stellar performance in Round 3 in the women's individual stroke play at the Tokyo Olympics on Friday.

Tokyo: Golfer Aditi Ashok is currently ranked second after another stellar performance in Round 3 in the women's individual stroke play at the Tokyo Olympics on Friday.

The 23-year-old rolled in five birdies to be placed second on twelve-under 201 ahead of a New Zealander, an Australian, a Japanese, and a Danish golfer (203) -- who all are tied on third place. The Indian finished round three with 68 (-3) for Day 3 here at the Kasumigaseki Country Club.

With half the field starting on the back 9 due to weather conditions, Nelly Korda (USA) retained the lead heading into Saturday's final round. 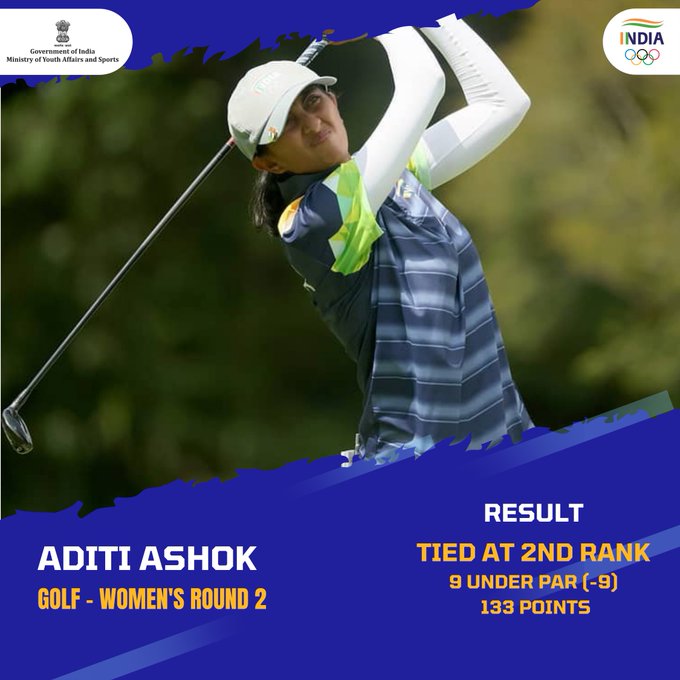 The American shot a 2-under 69 on Friday, to go with rounds of 4-under and 9-under, to sit at 15-under 198 through 54 holes. She is three strokes clear of Aditi currently who has been pretty consistent this whole week. Of the Rio 2016 medallists, reigning champion PARK Inbee (KOR) is tied-25th (par), reigning silver medallist Lydia Ko (NZL) is tied-3rd (10-under), and Shanshan Feng (CHN) is tied-10th (7-under).

Aditi Ashok has had three birdies in the first 8 holes and improved to an overall score of 12 under par. She was second by herself until then, with a 2-stroke lead over the third place.

The bogeys in holes 9 and 11 brought her down a bit but Aditi Ashok remained in the mix. Japan's Inami moved to -11 at that moment in the contest while the USA's Nelly Korda was comfortably on top throughout the penultimate round.

Another birdie in the 17th hole of the third round saw Aditi clawing back to 12 under par. In the final hole, the Indian sank a par to end the day with a nice cushion to third. (ANI)

Tokyo Olympics: UP govt to give Rs 6 crore to gold medal winners from state