The sudden demise of veteran actor Sridevi has sent shockwaves throughout the Indian film industry with many Bollywood celebrities such as Amitabh Bachchan, Rishi Kapoor, Rajinikanth and Kamal Haasan mourning and expressing their condolences.

Mumbai:The sudden demise of veteran actor Sridevi has sent shockwaves throughout the Indian film industry with many Bollywood celebrities such as Amitabh Bachchan, Rishi Kapoor, Rajinikanth and Kamal Haasan mourning and expressing their condolences.

The actor, who was 54, died late at Saturday night reportedly due to cardiac arrest in Dubai, where she had gone to attend her nephew Mohit Marwah's wedding.

The news of Sridevi's death spread like wildfire with stars such as her contemporary Madhuri Dixit, Priyanka Chopra, Sushmita Sen and Riteish Deshmukh taking to social media to express their grief.

The first one, however, was Amitabh Bachchan who in a cryptic tweet wrote, "Don't know why, feeling a strange restlessness." 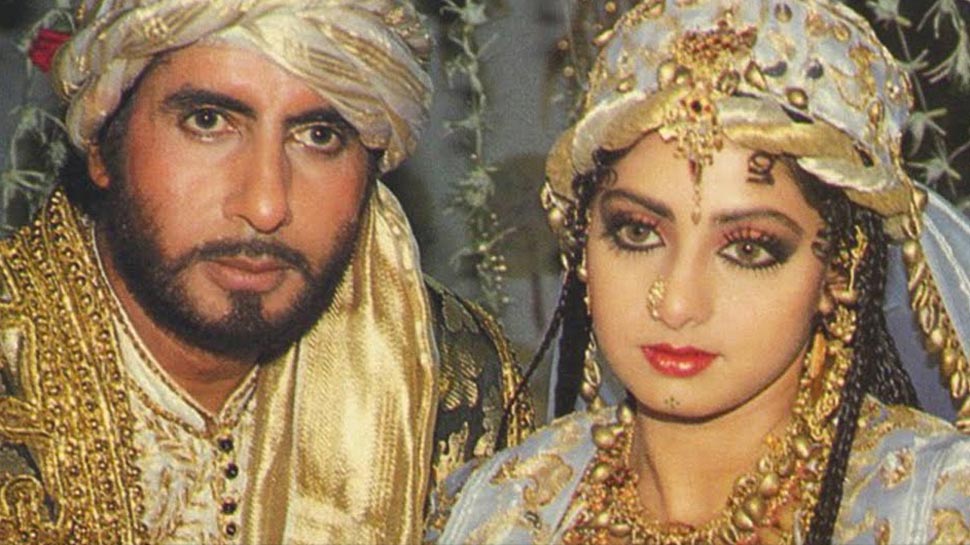 The megastar had worked with Sridevi in "Khuda Gawah" (1992).

Actor-turned-politician Rajinikanth tweeted that he had lost a dear friend.

"I'm shocked and very disturbed. I've lost a dear friend and the industry has lost a true legend. My heart goes out to her family and friends. I feel the pain with them #RIPSridevi... you will be missed," he wrote.

They together starred in "ChaalBaaz" and "Farishtay" among many others.

Kamal Haasan, who worked with Sridevi in "Sadma", the Hindi remake of their 1982 Tamil film "Moondram Pirai", wrote on Twitter that the lullaby 'Suramayi ankhiyon mein' from the movie haunts him today.

"Have witnessed Sridevi's life from an adolescent teenager to the magnificent lady she became. Her stardom was well deserved. Many happy moments with her flash through my mind including the last time I met her. Sadma's lullaby haunts me now. We'll miss her," Haasan wrote.

Her "Chandni" and "Nagina" co-star Rishi Kapoor said he is in complete shock to wake up to the news of Sridevi's death.

"Woken up to this tragic news. Absolute shock. Sad. Heartfelt condolences to Boney and their two daughters!" he wrote. The actor has also changed his profile picture to an all-black image in mourning.

Aamir said the actor will always be remembered with love and respect.

"My heartfelt condolences to everyone in the family. I join all the millions of her fans in mourning her demise..." Aamir wrote in a statement on Twitter.

Madhuri Dixit, one of Sridevi's contemporaries, also took to Twitter to mourn the demise of the actor.

"Just woke up to the terrible news of Sridevi passing. My heart goes out to her family. The world has lost a very talented person who left behind a huge legacy in film. #RIPSridevi."

"I have no words. Condolences to everyone who loved #Sridevi . A dark day. RIP," tweeted Priyanka, alongside a still of Sridevi from her superhit film "Mr India".

Riteish tweeted, Terrible terrible news . Am shocked beyond words. SRIDEVI ji No More RIP, , while Sushmita wrote that she has been inconsolable since the news broke. I just heard Ma'am Sridevi passed away due to a massive cardiac arrest. I am in shock cant stop crying "

Also Read: Margot Robbie feels her job is not 'glamorous'

Director Shekhar Kapur, who worked with Sridevi in the iconic "Mr India" called the actor's death the end of an era.

"Sridevi... gone. It's like an era is over. Like life turning a new chapter. A beautiful story just ended. An amazing spirit just vanished leaving us with amazing love, memories, and incredible grief," he wrote.

Director Subhash Ghai called the actor "the uncrowned queen of acting in all languages in her times".

"I am deeply grieved for this shocking loss. Sridevi has not been one of the finest actor but the finest actor of indian of cinema since 1985. Introvert by nature, she was electricity with thunder in front of camera. She would shock directors by her each shot taken on her on the sets, may it be dance drama or romance.

"She maintained her dignity and integrity as an actor and person both constantly at any cost in this demanding industry," Ghai said.

Actor-BJP MP Hema Malini said Sridevi's death is a loss to the Indian film industry, which would never be compensated.

"Sridevi's sudden passing away has left me in deep shock. Can't imagine how such a bubbly person, a wonderful actor, is no more.She has left a void in the industry that cannot be filled. Boney is a good friend and I've seen their daughters grow up. My prayers are with the family," she tweeted.

Anupam Kher, who has collaborated with Sridevi in films such as "Chaalbaaz", "Karma", "Laadla" and "Chandni" among others, said he cannot bring himself to talk about the actor in past tense.

"It is too uncomfortable to talk about someone you liked and admired so much in past tense. Can't talk much now," Kher told PTI.

Hansal Mehta said he was planning to approach the actor with a project but was too late.

"There will never be another #Sridevi. I was about to approach her for a film. That film will now be dedicated to her. If it finds an actor."

Actor Akshay Kumar wrote he had the fortune of working with the actor in "Meri Biwi Ka Jawaab Nahin", a film which was shot in 1994 but saw the theatrical release 10 years later.

"Shocked beyond words to hear about the sad and untimely demise of #Sridevi. A dream for many, had the good fortune of sharing screen space with her long ago and witnessed her continued grace over the years. Thoughts and prayers with the family. RIP," Akshay wrote.

Alia Bhatt wrote a condolence message for her "icon" on Twitter.

"Nothing makes sense. I have no words.. just completely shocked. RIP Sridevi. My icon forever. Love you," she tweeted.

Sridevi in her favourite Kanchivaram - one last time