Trump talked about finding the leakers and not of what have been leaked.

Washington D.C: U.S. President Donald Trump on Monday called on the Congress and Federal Bureau of Investigation (FBI) to investigate the leaks of classified information. 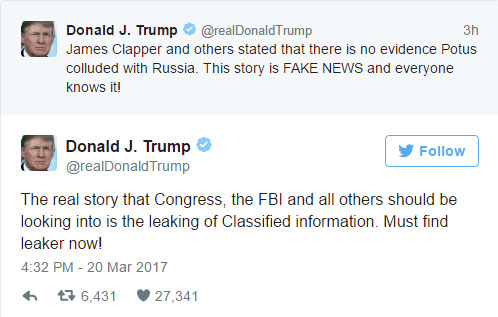 Trump took to his Twitter handle and accused his predecessor Barack Obama and former Director of National Intelligence James Clapper, saying that the claims of his collusion with Russia are just "FAKE NEWS."

Trump also accused the Democratic Party of fabricating the allegations of his links to Russia as an excuse for running a terrible campaign.

Trump also questioned Hillary Clinton's alleged contacts with the Russians and accused the Democratic Party of not letting the FBI look into the matter.

This tweet comes after U.S. House Intelligence Committee chairman Devin Nunes said on Sunday that there was no evidence of any links between Russia and the Trump campaign. (ANI)

Do not fall for Obama's video message, its fake!