UNSC condemned the launch of yet another ballistic missile by the Democratic People's Republic of Korea and called on the country's leadership to halt such activities and explore resumption of sincere dialogue on denuclearisation.


New York: The United Nations Security Council on Friday condemned the launch of yet another ballistic missile by the Democratic People's Republic of Korea (DPRK) and called on the country's leadership to halt such activities and explore resumption of sincere dialogue on denuclearisation.

United Nations Secretary-General Antonio Guterres called on the DPRK leadership "to cease further testing, comply with the relevant Security Council resolutions, and allow space to explore the resumption of sincere dialogue on denuclearisation."

The UNSC referred to the latest launch as a "manifest violation" of Security Council resolutions that comes less than two weeks after the DPRK conducted a test of a nuclear device on 3 September and only three days after the Security Council unanimously adopted fresh sanctions against the country.

Guterres will be discussing the situation on the Korean Peninsula with all concerned parties in the margins of the upcoming high level week of the UN General Assembly.

Also today, holding urgent consultations over the ballistic missile launch, the Security Council expressed its grave concern that the DPRK is, by conducting such a launch over Japan as well as its recent actions and public statements, deliberately undermining regional peace and stability and causing grave security concerns around the world.

Terming the ballistic missile launch as "highly provocative," the Council members "condemned further the DPRK for its outrageous actions, and demanded that the [the country] immediately cease all such actions." 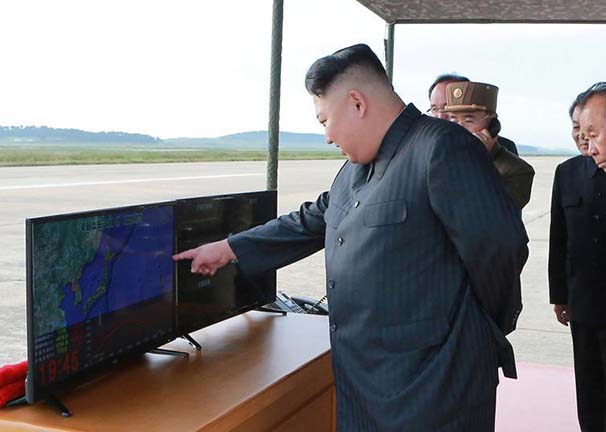 The Security Council stressed that these DPRK actions are not just a threat to the region, but to all UN Member States.

The 15-member Security Council also emphasized the vital importance of the DPRK immediately showing sincere commitment to denuclearization through concrete action and stressed the importance of working to reduce tensions in the Korean Peninsula and beyond.

It also demanded that the DPRK comply with the relevant Security Council resolutions as well as the statements of its President by suspending all activities related to its ballistic missile programme and, in that context, re-establish its pre-existing commitments to a moratorium on missile launches.

The Security Council also reiterated the importance of maintaining peace and stability on the Korean Peninsula and in north-east Asia at large, and expressed its commitment to a peaceful, diplomatic and political solution to the situation, welcoming efforts by Council members, as well as other States, to facilitate a peaceful and comprehensive solution through dialogue.

Meanwhile, North Korea has said it wants 'equilibrium' with the U.S.

"Our final goal is to establish the equilibrium of real force with the U.S. and make the U.S. rulers dare not talk about military option for the DPRK," leader Kim Jong-un reportedly said. (ANI)