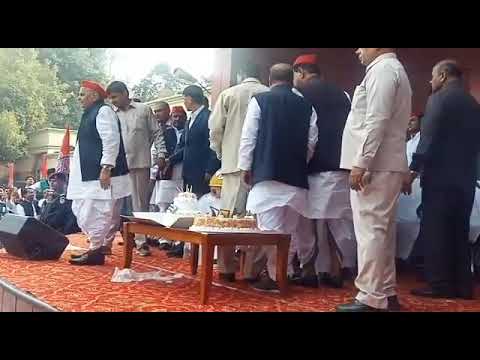 Mulayam's son and Samajwadi Party chief Akhilesh Yadav was also present on the occasion. The cake cutting ceremony was held in the presence of party workers and cadres.

As the Samajwadi party patron celebrates his birthday today, posters extending birthday greetings to Mulayam were also put up in front of the SP office as well as outside Pragatisheel Samajwadi Party's (PSP) office in the national capital.

Earlier in the day, Uttar Pradesh Chief Minister Yogi Adityanath had also extended greetings to Mulayam on his birthday and had wished for his healthy, long and active life.

He has also served as the Defence Minister from 1996 to 1998 during the rule of United Front government.Yadav has served as the Member of Parliament in the Lok Sabha from Azamgarh between 2014 and 2019. At present, he is the MP in the lower house from Mainpuri.(ANI)