As another blow to the legal effort by incumbent United States President Donald Trump and allies to overturn the election, the US Supreme Court on Tuesday rejected a bid by the Pennsylvania Republicans to nullify President-elect Joe Biden's victory in the state.

Washington: As another blow to the legal effort by incumbent United States President Donald Trump and allies to overturn the election, the US Supreme Court on Tuesday rejected a bid by the Pennsylvania Republicans to nullify President-elect Joe Biden's victory in the state.

According to The Hill, the Tuesday order, which was unsigned and included no noted dissents, came ahead of the midnight "safe harbour" deadline, which provides states with a kind of immunity from congressional oversight into the election results that are certified in time.

It further reported that the justices' move leaves intact Pennsylvania Governor Tom Wolf's certification of Biden's victory by a margin of more than 81,000 votes.

The verdict also represents a "lengthy string" of defeats for Trump's legal campaign, claiming widespread voter fraud. The incumbent President, in his Tweets, continuously called the election a fraud and claimed that he "won the election, by a lot".

The American daily further reported that one of the plaintiffs in the Supreme Court petition was Republican Representative Mike Kelly.

The challengers' original complaint was filed in the state court last month that sought to strike down "an expanded" mail-in ballot policy that Pennsylvania put in place in 2019 after it was passed by the state's GOP (Grand Old Party, or the Republican Party)-led legislature.

According to an analysis of the Pennsylvania Department of State data by The Philadelphia Inquirer, the former US Vice-President won three out of four mail-in ballots cast in the state.

The Pennsylvania Supreme Court rejected the case late last month, citing the litigants' undue delay in bringing the challenge, prompting the petition to the US Supreme Court. The attorneys argued that the top state court had violated their due process rights and other constitutional guarantees. 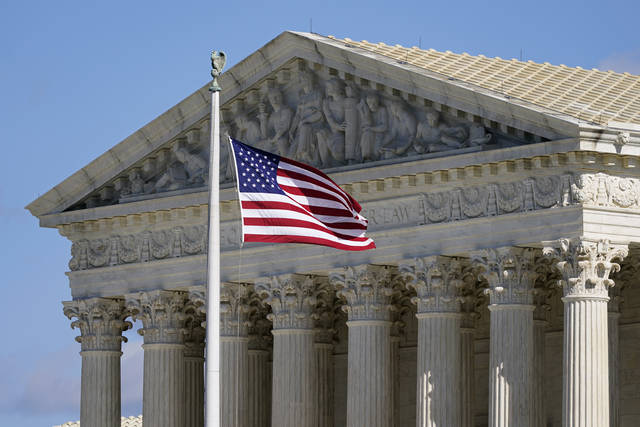 "No court has ever issued an order nullifying a governor's certification of presidential election results," they argued in a brief as quoted by The Hill. "The loss of public trust in our constitutional order resulting in this kind of judicial power would be incalculable."

The court's denial came just hours after Trump expressed hope that the Supreme Court would embrace his claims of having won the election.

He added, "Let's see if they have the courage to do what everybody in this country knows is right."

Biden is being projected as the winner of the Presidential elections in the US after he clinched the state of Pennsylvania to take him past the required 270 Electoral College-vote mark. (ANI)