Celebrations are in full swing on the occasion of Ganga Saptami with chants echoing at the 'Kashi k Dashami ghat' on Saturday.


Varanasi: Celebrations are in full swing on the occasion of Ganga Saptami with chants echoing at the 'Kashi k Dashami ghat' on Saturday.

Varanasi, which is known for celebrating Ganga Saptami in a traditional way every year, held Pujas. The occasion marks the birth of River Ganga.

According to the mythological beliefs, on this day, Ganga came on the earth after being pleased with the harsh austerity of Rishi Bhagirath. 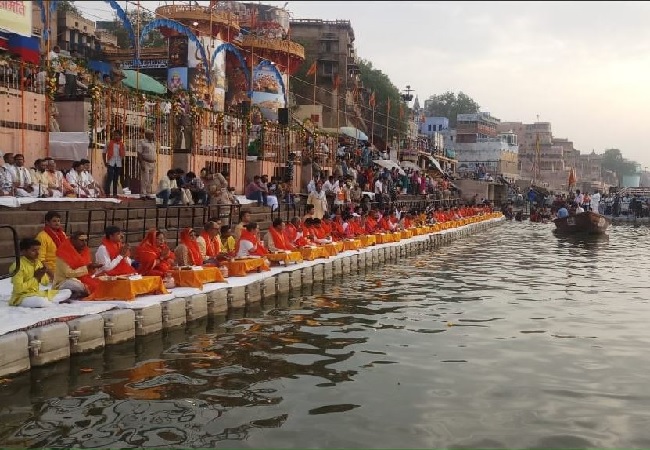 Chief organizer and priest of Kashi Vishwanath temple, Pandit Shrikant said: "Like every year, we have gathered here at the 'Kashi k Dashami ghat' in Varanasi to celebrate the birth of Ganga Ma."

"People from various sections of the national and international community have come to the ghat to celebrate this day. People from all over the world have come to dip in Ganga and wash their sins," he added.

It is said that on this day taking a dip into the holy waters destroys the sins. This day also sprinkles light upon the significance of charity. It is believed that on this day, salvation is attained by performing Ganga bath, ascetic meditation and charity.

BJP leader Dharmendra Singh said, "People come to the Ghats on this day and 'Ma Ganga' fulfils the wishes of its true followers."

Ganga Saptami is observed on the 7th day of Shukla Paksha in the Month of Vaishakha. (ANI)

11 rescued in Gurdaspur after Beas overflows