Actor Vivek Oberoi, who is himself a Bollywood star, had his 'fan moment' when he met 'Octopussy' star Maud Adams in real in Las Vegas.

New Delhi: Actor Vivek Oberoi, who is himself a Bollywood star, had his 'fan moment' when he met 'Octopussy' star Maud Adams in real in Las Vegas.

Maud Adams is known for her role as Bond girl in two films- 'The Man with the Golden Gun' (1974) and 'Octopussy'.

Calling Maud a 'timelessly beautiful' and 'legend in her own right', Vivek took to social media to share a happy picture of his fanboy moment.

The picture shows the 'Saathiya' actor striking a picture-perfect pose with the Hollywood star as they both twin in black outfits.

"Fanboy moment! Hollywood superstar, gorgeous Bond girl", legend in her own right and timelessly beautiful #MaudAdams- the unforgettable 'octopussy' in one of my favourite bond films. It was lovely meeting you!" he captioned the picture. 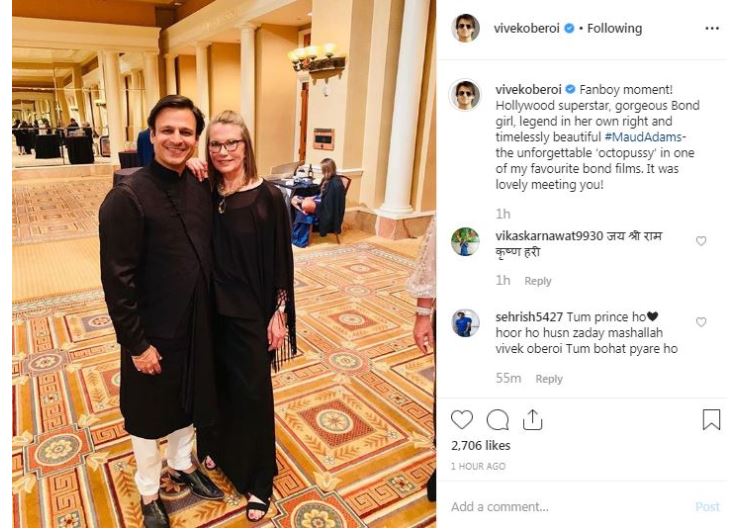 On the work front, Vivek was last seen in Prime Minister Narendra Modi biopic titled 'PM Narendra Modi' and is set to star in the film based on Balakot airstrike 'Balakot: The True Story'.

The film will be shot in Jammu, Kashmir, Delhi, and Agra and will be made in Hindi, Tamil, and Telugu. (ANI)