Voting began Sunday morning for the bypoll to the Panaji assembly constituency, which was necessitated due to the death of former Goa chief minister Manohar Parrikar in March.

Panaji: Voting began Sunday morning for the bypoll to the Panaji assembly constituency, which was necessitated due to the death of former Goa chief minister Manohar Parrikar in March.

Polling began at 7 am, officials said. As many as 22,482 voters are eligible to exercise their franchise in the constituency which covers areas including the state capital and has 30 polling stations.

Parrikar, who passed away on March 17 battling pancreatic ailment, had represented the constituency for nearly two-and-a-half decades since 1994. Six candidates, including two Independents, are in the fray for the bye-election.

The BJP, which has dominated the constituency, has nominated Siddharth Kunkolienkar as its candidate. The saffron party is fighting to retain its hold over the constituency considered as its fiefdom. 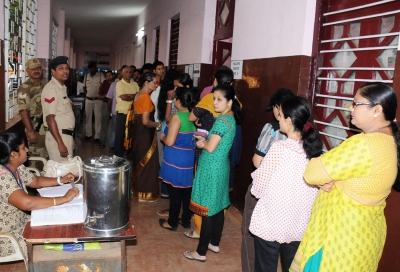 Kunkolienkar had won twice from this assembly seat when Parrikar was elevated to Central cabinet as the Defence Minister between 2014 and 2017.

The Congress has fielded its former Minister Atanasio Monserratte, who had lost against Kunkolienkar in the 2017 state Assembly election by over 1,500 votes. Monserratte had contested as an Independent. Former RSS Goa Chief Subhash Velingkar is contesting his first election on Goa Suraksha Manch (GSM) ticket. The Aam Aadmi Party (AAP) has fielded Valmiki Naik, who had lost the last assembly election from Panaji in February 2017.

Two Independent candidates Dilip Ghadi and Vijai More are also in the fray. No queues were seen outside the polling stations when the voting began. Kunkolienkar and Velingkar were amongst the early voters who exercised their franchise at their respective booths. The counting of votes is scheduled on May 23. (PTI)