Waterlogging in several areas after incessant rains in Delhi

Incessant rains in Delhi on Wednesday have led to waterlogging in several areas of the city.

New Delhi: Incessant rains in Delhi on Wednesday have led to waterlogging in several areas of the city.

The movement of traffic has also been affected by the continuous rain.

Jay Narayan, an auto-driver, said that his auto has stopped working thrice since yesterday due to waterlogging.

Dhram Singh, a resident of Gole Market said that there is waterlogging in the different parts of the cities which is affecting the movement of traffic. 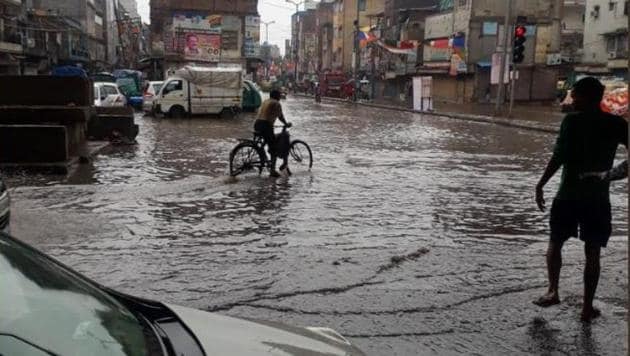 The national capital and the adjoining area witnessed continuous rainfall since Wednesday morning as the cyclonic storm Tauktae impacted the weather conditions in several parts of Northern India.

However, the national capital has got relief from the scorching summer heat with the temperature being recorded at 21 degrees celsius at 8:30 am on Thursday.

Dhram Singh further said that he has seen such weather in the month of May for the first time.

Sanjay Tyagi said, "The weather is nice. We have been witnessing rainfall since yesterday morning and it stopped at the wee hours today. We have got relief from the summer".

As much as 60 mm rainfall was recorded at Safdarjung within 12 hours from 8.30 am till 8.30 pm yesterday, according to India Meteorological Department (IMD).

Delhiites wake up to rainy day