Bharatiya Janata Party (BJP) President JP Nadda on Thursday said suggestion boxes and digital raths (vehicle) will be used to collect suggestions of the people ahead of Assembly elections in the state.

Kolkata: Bharatiya Janata Party (BJP) President JP Nadda on Thursday said suggestion boxes and digital raths (vehicle) will be used to collect suggestions of the people ahead of Assembly elections in the state. 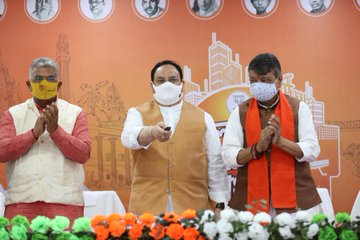 "So we are going to take more than 2 crore suggestions. Approximately, we will make available 30,000 suggestion boxes in the state. In 294 Assembly constituencies, around 100 suggestion boxes will be placed. Our workers will reach several homes with 50 boxes and 50 boxes we will kept at strategic or prominent places so that we can get suggestions," Nadda said. 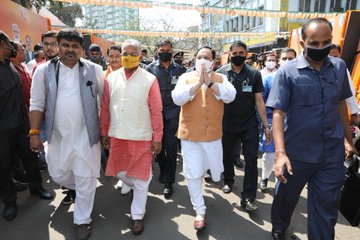 "Similarly, I am launching LED raths. For every constituency, there will be one LED rath. In that, we will also fulfill the requirement of giving suggestions digitally. Our miss call number will be 9727294294. On this moble one can give miss call and give suggestion. On this number Whatsapp message can be sent so that we can get their suggestion," the BJP president said.

He added, similarly, on website www.lokkhosonarbangla.com suggestions can be given. This campaign will span between March 3 to March 20.

Nadda further said, "There are around 10 crore farmers in the country, of these around 73 lakhs are in Bengal itself. Seven installments of Pradhan Mantri Kisan Samman Nidhi have already been released but the farmers of Bengal have remained deprived of it."

"The Prime Minister has said we will provide the previous installments and when our government is formed in Bengal, Pradhan Mantri Kisan Samman Nidhi will be launched here and 73 lakh farmers of the state will be benefitted," he said. 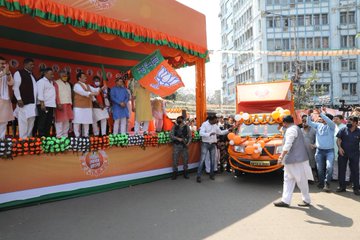 Before the start of the event, Actor Payel Sarkar joined the BJP in the presence of state party chief Dilip Ghosh and national president Nadda. (ANI)

Mamata did nothing for tribals, farmers of Bengal: Nadda