6 killed in building collapse in Bengaluru

At least six persons were killed and some others feared trapped when a two-storeyed building collapsed due to a suspected LPG cylinder blast near Ejipura.


Bengaluru: At least six persons were killed and some others feared trapped when a two-storeyed building collapsed due to a suspected LPG cylinder blast near Ejipura in the city today, the police said.

Eye-witnesses said the blast took place at around 7 a.m. They said a noise of the blast was heard and the 20 year-old building was reduced to rubble.

Personnel of the Fire brigade and National Disaster Response Force, who rushed to the spot, recovered the bodies including that of two women.

Two of the deceased have been identified as Kalavathi (68) and Ravichandran (30). Two children, who were rescued from the debris were out of danger, police said.

Karnataka Home Minister Ramalinga Reddy, who visited the spot, told reporters that the building belonged to one Gunesh. 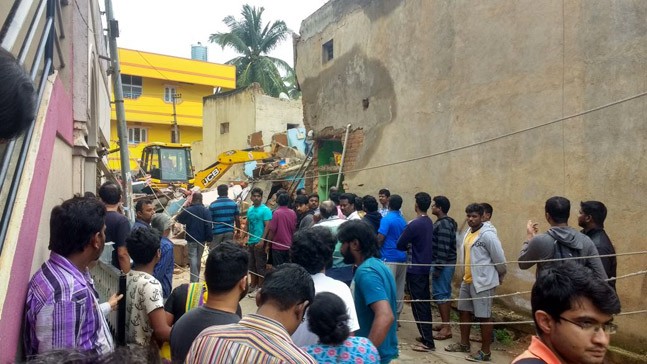 Gunesh had rented the building to four families, he added.

At least 40 fire-fighters and NDRF personnel were carrying out rescue operation.

While clearing debris to pull out those trapped in the building, three fire-fighters were injured as a wall fell on them, police said adding they had been shifted to a nearby hospital. (PTI)

9 members of a family killed in accident in Rajasthan

Aero India will not be shifted out of Bengaluru