The Supreme Court will pronounce its historic verdict on a batch of a petition against the 2010 Allahabad High Court order in the politically-sensitive Ramjanmbhoomi-Babri Masjid land dispute case Saturday morning.


New Delhi: The Supreme Court will pronounce its historic verdict on a batch of a petition against the 2010 Allahabad High Court order in the politically-sensitive Ramjanmbhoomi-Babri Masjid land dispute case Saturday morning.

Prime Minister Narendra Modi has appealed for calm ahead of the verdict as security has been beefed in Uttar Pradesh especially in Ayodhya. School and colleges are shut in Uttar Pradesh, Karnataka, Jammu and Kashmir, Madhya Pradesh and Delhi and prohibitory orders have been clamped in several places across the country. 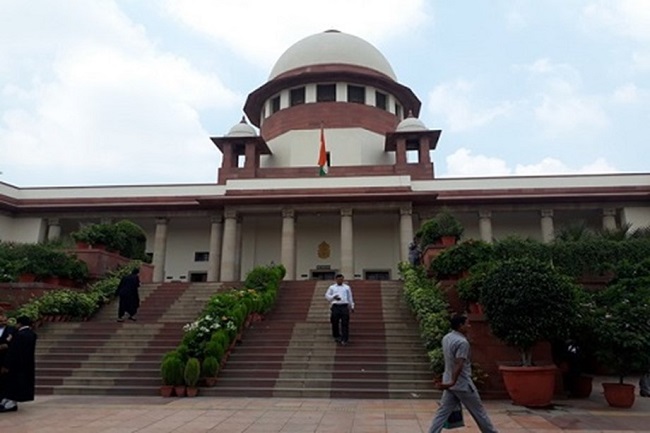 Here is a timeline of the second-lengthiest case in the apex court history:

1885: Mahant Raghubir Das files a petition in the Faizabad District Court, seeking permission to build raise a structure next to the mosque. The plea is rejected.

1950: Two suits filed in a Faizabad court by Gopal Simla Visharad and Paramhansa Ramachandra Das, seeking permission to worship the idols at the mosque

1959: Nirmohi Akhara, a party in the case in the Supreme Court, files suit seeking possession of the site

Also Read: Neither celebrate nor protest over Supreme Court verdict on Ayodhya

1981: Uttar Pradesh Sunni Central Waqf Board files suit for possession of the site and removal of idols from the mosque

1986: A local court orders opening of the site and allows Hindus to offer prayers.

1993: The Central passes an Act to acquire land in and around the disputed site in Ayodhya.

1994: In the Ismail Faruqui case, the Supreme Court rules that the mosque is not integral to Islam

Also Read: Ahead of Ayodhya verdict, Gadkari appeals all to maintain peace

2002: The Allahabad High Court starts hearing to adjudicate the ownership of the disputed site.

2003: The Supreme Court bars any religious activity at the site.

2010: The Allahabad High Court rules trifurcation of the 2.77-acre disputed land between UP Sunni Waqf Board, the Nirmohi Akhara and Ram Lalla Virajman.

2016: BJP leader Subramanian Swamy files plea in the Supreme Court seeking permission to worship and construction of Ram Temple at the disputed site.

2018: The Supreme Court rejects all interim pleas, including that of Swamy, seeking to intervene as parties in the case. Advocate Rajeev Dhavan files plea in the court requesting it to refer the issue of reconsideration of its 1994 judgement to a larger bench which is denied. The court forms a three-judge bench instead to hear the case.

March 2019: The Supreme Court appoints a mediation panel headed by Judge (retd) FMI Kallifulla for an out-of-court settlement on March 8.