Samajwadi Party president Akhilesh Yadav Tuesday extended his party's support to the farmers protesting under the aegis of Bharatiya Kisan Union in support of various demands ranging from farm loan waiver to cut in fuel prices. 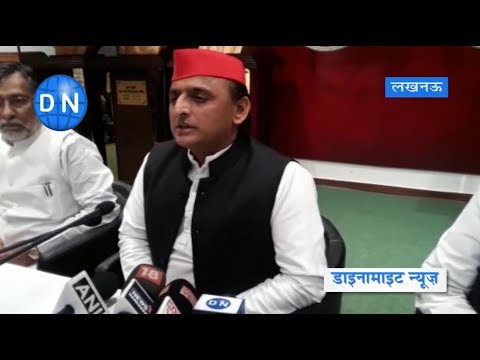 As thousands of farmers tried to enter the national capital in a massive protest march, the government Tuesday announced that a committee of chief ministers will look into their demands, even as the protesters stayed put saying they were not "satisfied" with the assurance.

Farmers marching towards Delhi under BKU's protest call were stopped at the Delhi-Uttar Pradesh border, as they tried to run through the border, surmounting the barricades.

'The farmers have come out in support of their various demands... If we look at things, in the past over four years, almost 50,000 farmers have committed suicide, mostly in BJP-ruled states, including Uttar Pradesh," Akhilesh Yadav said.

"The BJP government had decided that a package will be prepared for clearing loan dues but it is still pending ... petrol, diesel prices are constantly being increased , demonetisation and GST have also hit farmers just like traders," he said.

The former chief minister said the government had promised farm loan waiver but several farmers are yet to benefit.

"It was said that loans of all the farmers will be waived but it is still pending for several farmers ... The new cane crop is getting ready, sugar mills have to start crushing but the payment of the past is pending and so the farmers have come out on the roads," Yadav said.

He said sugar is being imported from Pakistan while that produced domestically "fails to get a market".

Yadav alleged that the prime minister announced the minimum support price hike "without any preparation".

Yadav's statement comes in the wake of the 'Kisan Kranti Yatra' in which thousands of farmers marched from Tikait Ghat in Haridwar towards Delhi in support of their demands. (PTI)

Thousands of farmers march towards Delhi