Bollywood actor Akshay Kumar on Friday dropped the teaser of his upcoming psychological thriller fill 'Cuttputlli', in which he will be starring alongside Rakul Preet Singh. Read more on Dynamite News:

New Delhi: Bollywood actor Akshay Kumar on Friday dropped the teaser of his upcoming psychological thriller fill 'Cuttputlli', in which he will be starring alongside Rakul Preet Singh. 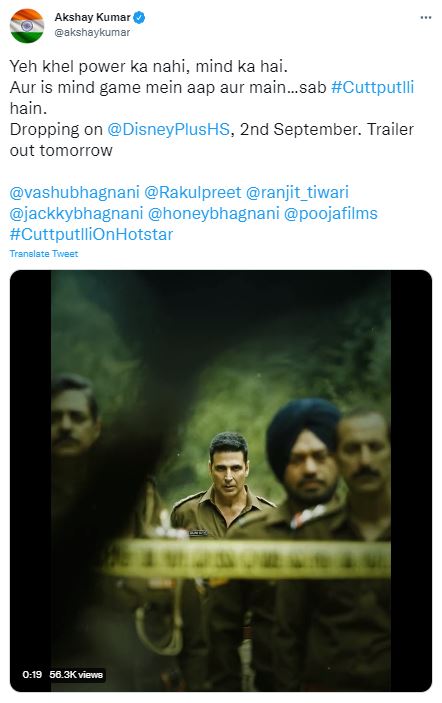 The plot of the film will be riddled with secrets and a journey of intercepting a serial killer's psychology. 'Cuttputlli' is being produced by Vashu Bhagnani, Jackky Bhagnani and Deepshikha Deshmukh.

Speaking about the upcoming film, in a statement, Akshay said, "I have always believed in re-inventing myself and disrupting what's already done. Khiladi was a special movie for me in more ways than one - A thriller that changed my life and established my identity in the movies. All these years I kept seeking a script in the thriller genre with an element of the unthinkable. Cuttputlli came my way and totally 'thrilled' me! It has been a delight to work with Pooja entertainment and Ranjit yet again. I want this film to be watched by a large audience across the globe."

Directed by Ranjit M Tewari, 'Cuttputlli' will release on Disney Plus Hotstar on September 2 and its trailer is set to be unveiled tomorrow.

Meanwhile, Akshay will be next seen in 'Ram Setu' alongside Jacqueline Fernandez and Nushrratt Bharuccha, which is slated to release on the occasion of Diwali 2022. He will also be seen opposite Radhika Madan in the Hindi remake of Suriya's Tamil film 'Soorarai Pottru' and opposite Emraan Hashmi in 'Selfie'. (ANI)

Bollywood: Akshay Kumar's 'Cuttputlli' trailer is all about his quest to find the serial killer

'Saathiya': First romantic track of Akshay Kumar's 'Cuttputli' is out