Indian shooter Deepak Kumar bagged a silver medal in the 10m Air Rifle event at the ongoing 18th edition of the Asian Games here on Monday.

Palembang: After a hard-fought final, Indian shooter Deepak Kumar bagged a silver medal in the 10m Air Rifle event at the ongoing 18th edition of the Asian Games here on Monday.

Deepak shot a score of 247.7 to finish at the second position behind China's Haoran Yang, who bagged the gold with an Asian Games record score of 249.1 at the JSC Shooting Range.

Shaochuan Lu of Chinese Taipei took home the bronze after posting a score of 226.8.

Also Read: Neeraj Chopra looking to give his absolute best in Asian Games

Ravi Kumar, the other Indian in the fray, made a fourth-place finish with a score of 205.2. 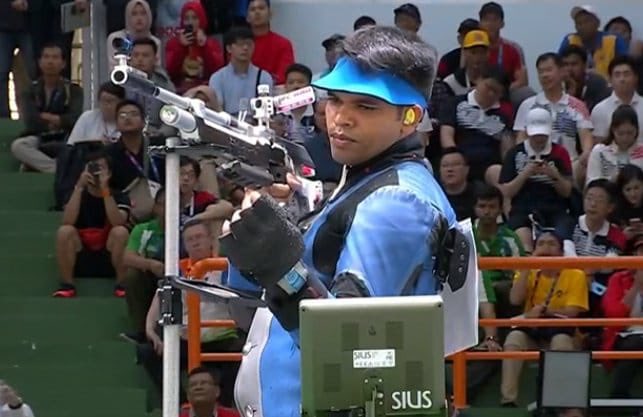 Earlier, Ravi and Deepak had qualified for the finals of the 10m Air Rifle event after finishing at the fourth and fifth spots respectively, with scores of 626.7 and 626.3.

Continuing his good performance, Deepak gave a tough competition to Yang before settling for the silver medal. He earlier made it to the finals in the Commonwealth Games (finishing fifth) and the World Cup held in Guadalajara, Mexico (finishing fourth) earlier this year.

Ravi Kumar had opened India's medal tally at the Asian Games on Sunday by clinching a bronze medal in the 10m Air Rifle Mixed Team event along with Apurvi Chandela.

Deepak has now handed India its second medal in shooting. The country's medal tally stands at three-one gold, one silver and one bronze. (ANI)