Launching a blistering attack on the Mamata Banerjee-led Trinamool Congress, Prime Minister Narendra Modi on Saturday said a massive BJP wave has been sweeping Bengal and the country is saying something major is going to happen in the state.

Buniadpur: Launching a blistering attack on the Mamata Banerjee-led Trinamool Congress, Prime Minister Narendra Modi on Saturday said a massive BJP wave has been sweeping  Bengal and the country is saying something major is going to happen in the state.

Addressing an election rally here ahead of the third phase polling on April 23,  Modi said, ' I'm carried away by the overwhelming response of the people here, ' and said the first two phases of polling has put a 'brake' on 'Speed-breaker Didi's' (Mamata Banerjee) sleep.

Making it clear that those indulging in violent activities against the BJP will be taken to task,  Modi said, ' In Bengal, administration has completely collapsed and lumpen elements are ruling the roost for which the history, the future and the people of the state will never pardon Mamata Banerjee, ' and added that the law and order situation has undergone a marked improvement in UP and Assam after the BJP came to the saddle.

' Aunt-Nephew ( Mamata-Abhishek) has brought bad name to the culture of Bengal and this Trinamool Congress is a party of 'jagai-madhai', ' Modi asserted and said the Chief Minister has miserably failed to mete out justice to the people's faith reposed in her.

Stating that the Bengal Government has failed to pay DA to its employees and also implement the Pay Commission which even the Tripura Government has implemented, the Prime Minister said, ' Though I thought Mamata Banerjee is the epitome of honesty, but later I came to this realisation that she always stands by the those resorting to corruption and extortion. ' 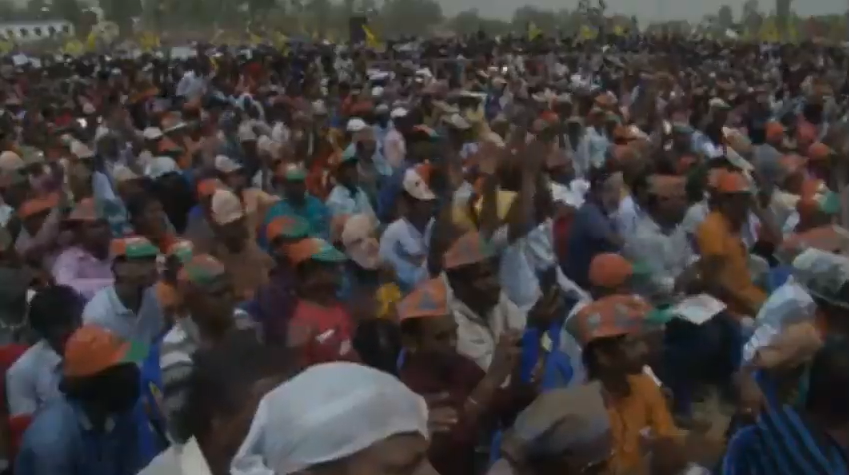 The fallout of 'goonda raj' in Bengal will be reflected in the May 23 election result, Modi said, adding, ' It's shocking that 'Didi' has money to distribute among the 'goondas', but no money for paying DA among its employees. ' Once again reiterating that 'Didi has no faith in the Army', the Prime Minister alleged that 'to win the election, Didi doesn't even bother to seek support of the terrorists'.

' This Trinamool Government doesn't do anything in the state but only stand by infiltrators, ' Modi called upon the people to bring back the BJP to power at the Centre for a strong and developed India.(UNI)