Intense cold has slowed down business activities in Punjab's Amritsar.

Several vegetable and fruit sellers from the city told that customers were not coming out of their homes due to the cold and foggy conditions.

"We have not seen the sun for the past few days. Our business has been affected as there are very few customers. It is very cold," said Santuur Singh, a vegetable seller.

"We have not been getting business in the past few days. People are not coming out to buy fruits in the morning," said Mandeep Singh, a fruit seller. 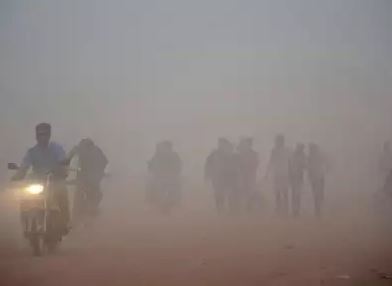 According to India Meteorological Department (IMD), in Amritsar, the sky will generally be cloudy till December 30 and the temperature would hover around 4 degrees Celsius and 10 degrees Celsius.

The city is expected to receive rainfall and thundershowers on December 31.

The temperature has also dropped in Ludhiana making tough for people to move about outdoors in the morning. In several parts of Ludhiana, the cold wave has intensified and a layer of fog covered the city resulting in low visibility on the roads.

According to the weather forecast agency, the sky will generally be cloudy for the next two days. The temperature would hover around 6 degrees Celsius and 11 degrees Celsius. (ANI)