The Yatra is in its Kerala leg and would traverse through the state for the next 17 days. Read more on Dynamite News

Before starting the march from Navayikkulam, Rahul Gandhi paid his respects to social reformer Sree Narayana Guru at Sivagiri mutt in Kerala. 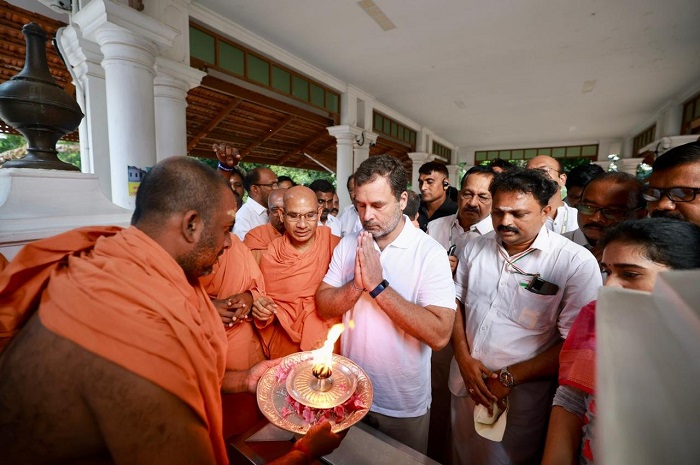 The Yatra is in its Kerala leg and would traverse through the state for the next 17 days.

The 3,500-km march from Kanyakumari to Kashmir will be completed in 150 days and cover as many as 12 states. From Kerala, the Yatra will traverse through the state for the next 18 days, reaching Karnataka on September 30. It will be in Karnataka for 21 days before moving north. The Padyatra (march) will cover a distance of 25 km every day.

Rahul Gandhi on Tuesday had said that the spirit of the Bharat Jodo Yatra is to bring Indians together irrespective of religion, community and remind them that this is one country and it will be successful if we stand together and are respectful towards each other.

Meanwhile, a political row erupted after Congress posted a picture of a burning pair of RSS shorts on Twitter. Bharatiya Janata Party Yuva Morcha President Tejasvi Surya said the picture depicted that the fires that the Congress has stoked in the past has burned its political fortunes in the country.

Earlier on Monday, Congress tweeted a picture of fire-lit 'Khakhi' shorts and wrote, "To free the country from shackles of hate and undo the damage done by BJP-RSS. Step by step, we will reach our goal".

The tweet came in light of the current Bharat Jodo Yatra which marks day 6 today.

In a series of tweets, Surya recalled various incidents of violence in the past including the Delhi anti-Sikh riots in 1984 and Godhra incident in 2002 where Karsevaks were burnt alive. The BJP leader hit out at Rahul Gandhi who is leading the Yatra and is currently in Kerala, and said that he is "fighting against the Indian state".

Making a scathing attack on Rahul Gandhi for meeting controversial Catholic priest George Ponnaiah, Union minister Ajay Bhatt on Sunday slammed him for supporting people who want to divide India and said that Congress has been opposing every decision of PM Narendra Modi including the scrapping of Article 370 from Jammu and Kashmir and the surgical strikes in Pakistan Occupied Kashmir (PoK).

According to Congress, the 'Bharat Jodo Yatra' is being held to combat the divisive politics of the BJP-led Centre and to awaken the people of the country to the dangers of economic inequalities, social polarisation, and political centralization.

The Yatra includes Padayatras, rallies, and public meetings which will be attended by the senior Congress leaders including Sonia Gandhi and Priyanka Gandhi Vadra.

Notably, all the party MPs, leaders, and workers along with Rahul Gandhi are staying together. Sleeping beds, toilets, and ACs are also installed in some of the containers. During the journey, the temperature and environment will differ in many areas. The arrangements have been made keeping in view the intense heat and humidity with the change of place.

The Congress suffered a debacle in the assembly polls held earlier this year and the Yatra is seen as an attempt to rally the party rank and file for the upcoming electoral battles. (ANI)