Nearly 30 people have been killed and dozens of others remain missing amid unprecedented wildfires on the US West Coast.


Washington: Nearly 30 people have been killed and dozens of others remain missing amid unprecedented wildfires on the US West Coast, NBC reports.

"There are going to be a number of fatalities, folks who just couldn't get warning in time and evacuate their homes and get to safety," Oregon Emergency Management Director Andrew Phelps told MSNBC, warning of a "mass fatality incident."

Tens of thousands of people in California, Oregon and Washington have been forced to evacuate amid the wildfires, NBC said on Saturday. In Oregon, the death toll from the fires currently stands at eight; in Washington, a 1-year-old boy was reported to have died in a fire.According to the Saturday report from the California Department of Forestry and Fire Protection (Cal Fire), a total of 19 people have been killed by wildfires in the state so far. 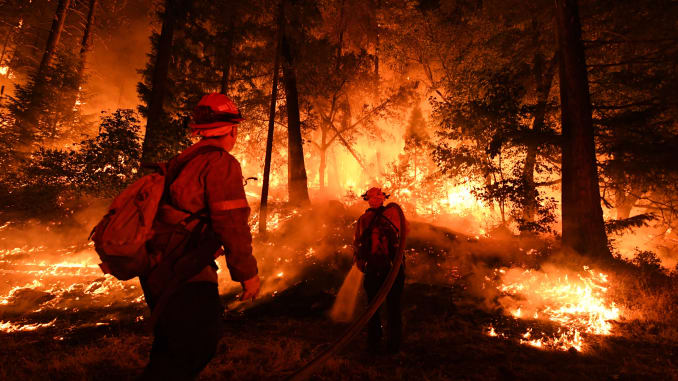 "Over 16,000 firefighters continue working to gain containment on the 28 major wildfires across California," Cal Fire said on Saturday, adding that "since the beginning of the year, wildfires have burned over 3.2 million acres in California, which is larger than the State of Connecticut" and have destroyed over 4,000 structures.

Five of California's current wildfires are in the state's top 10. The North Complex Fire has become the largest wildfire in state history and California is also struggling with the third largest and fourth largest fires in its history.

White House Deputy Press Secretary Judd Deere said in a Twitter statement on Saturday that US President Donald Trump was going to visit California on Monday, to get briefed on the wildfire situation. (ANI/Sputnik)