Netizens have been grooving to the meme-worthy track 'PawriHoriHai' since music composer Yashraj Mukhate came up with his composition of the "pawry anthem". Now, Bollywood's queen of hearts Deepika Padukone has also joined the bandwagon with her own version of the viral meme.

New Delhi: Netizens have been grooving to the meme-worthy track 'PawriHoriHai' since music composer Yashraj Mukhate came up with his composition of the "pawry anthem". Now, Bollywood's queen of hearts Deepika Padukone has also joined the bandwagon with her own version of the viral meme.

The 'Padmaavat' actor shared a rib-tickling picture on Instagram and wrote, "who made this?" with a laughing-out loud emoticon.<br>The image is a throwback picture that sees a young Deepika sitting on a wooden horse toy. The picture also features text, which reads, "Yeh hum hain, yeh hamara ghoda hain, aur yeh hamari pawri ho rahi hain."

The post from the talented actor received more than 1 lakh likes within few minutes of being posted on the photo-sharing application. 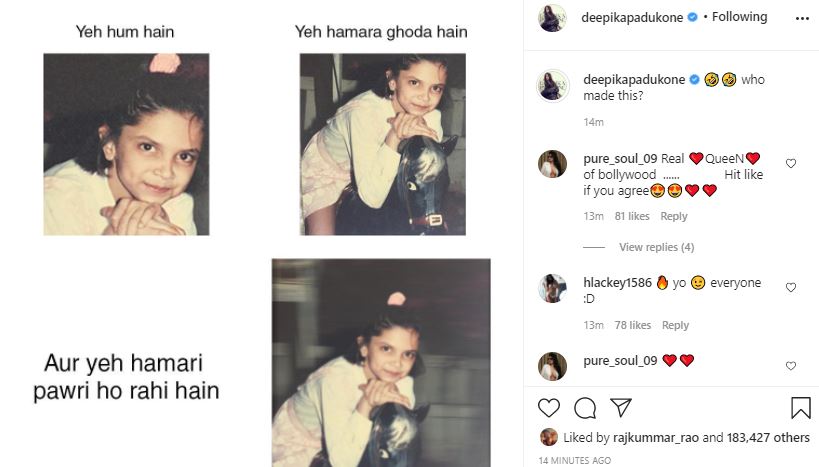 Yashraj, who has made a name for himself by making iconic tracks out of some dialogues or meme-worthy content, recently posted the new track incorporating the famous #PawriHoriHai, which has gone viral on social media.

However, it is important to note where the word "pawri" came from. Last week, a Pakistani influencer and content creator named Dananeer Mobeen went viral on social media in which she could be seen vacationing in a hilly location.

In her 15-second video, she could be heard saying, "Ye humari car hai aur yeh hum hai aur ye humari pawri ho rahi hai (this is our car, this is us, and this is our party)."

Mobeen saying party as "pawri" has triggered a meme fest on social media and Mukhate also stepped on the bandwagon to use the word to make a party anthem that everyone can groove to.

As soon as the new composition was posted on Mukhate's Instagram account, users started to comment and there were the likes of Bollywood celebrities including Randeep Hooda, Sidhant Chaturvedi, Archana Puran Singh, and Fatima Sana Shaikh, who gave their approval to this "pawri anthem".

Several other users took to Twitter to approve of Mukhate's new "pawri anthem" and memes started to flock in.

Dananeer creates content on a range of topics including the latest make-up and fashion trends. She also speaks on mental health issues plaguing the youth of Pakistan.

While the footage has been recreated hundreds of times with #pawrihoraihai on Twitter, the video has over a million views on Dananeer's official Instagram handle alone. Yashraj</a> has earlier composed several iconic tracks like 'Rasode mein kaun tha,' 'Biggini shoot' and 'Tuadda Kutta Tommy.'

Meanwhile, on the work front, Deepika has an impressive line-up of projects in the pipeline including 'Fighter', '83', 'Baiju Bawra', 'Sanki', 'Pathan', and Indian adaptation of Nancy Meyers's 2015 hit Hollywood film 'The Intern'. (ANI)